Sometimes the combination of yarn, needles, and stitch pattern come together so beautifully that a garment seems to knit itself. That seems to be the case with the Briar Rose Glory Days yarns, size 5 needles, and textured rib pattern that I’m using for my next sweater.
I’m following the instructions for a saddle-shoulder cardigan in The Knitter’s Handy Book of Top-Down Sweaters (page 187) for a 40″ circumference at 6 stitches to inch. 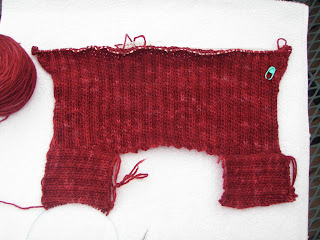 The textured rib pattern is a multiple of 4 stitches + 1, so instead of working the saddles on 20 stitches as directed for my size/gauge on page 187, I worked each on 21 stitches. To make it easier to pick up stitches along the edges of the saddles later, I knitted the first and last stitch of every row to make garter selvedge stitches:
RS rows: K1 (selvedge st), *k1, sl 1. k2; rep from * to last 4 sts, k1, sl 1, k1, k1 (selvedge st).
WS rows: K1 (selvedge st), *p3, k1; rep from * to last 4 sts, p3, k1 (selvedge st).
To begin the back, I picked up 24 stitches across one saddle, used the knitted method to cast on 41 stitches (instead of the 40 instructed to accommodate the stitch pattern), then picked up 24 stitches across the other saddle. This gave me a total of 89 stitches (instead of 88), which balanced the stitch pattern at the two armhole edges (with right-side facing, both sides have a selvedge stitch followed by a k3 column).
Again, knitting the first and last stitch of every row for garter selvedges, I shaped the shoulders with short-rows (in two increments of 7 stitches as directed, but working 8 stitches in the last increment), then worked straight for 6 1/4″ (indicated by the marker), then started the armhole by increasing one stitch (using the M1 technique) at each end of the needle every right-side row six times, followed by casting on 4 stitches at each side to end with a total of 109 stitches (instead of 108).
I’ve just picked up 24 stitches along the other edge of one saddle to begin working the right front.

1 thought on “Glory Days — Off to a Good Start”