Ahh. I finished the first Slip-n-Slide sock from Sock Knitting Master Class and I’m very pleased! The pattern was easy to memorize and creates beautiful texture. 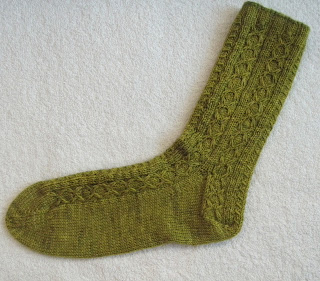 The originals (pictured on page 108 of the book) were a little small for my feet so I added 6 sts and I made the leg and foot longer.
Here’s what I changed: