We are now a happy family of five again.
Last night, our oldest son returned from three months in Spain. While there, he hiked 500 miles (!) along the  El Camino de Santiago trail in the Pyrenees, then he spent three weeks each volunteering on organic farms.
I took a photo of him when he checked in at the airport back in September. 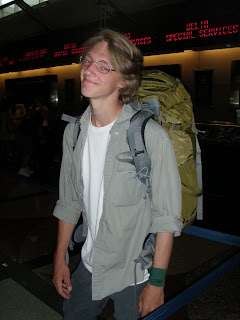 I took a photo when he got off the plane last night but I’m unable to post it–I can’t seem to figure out how to email myself a photo from my iPhone. You’ll have to trust me that despite much longer hair and much, much dirtier clothes, he looks about the same.
I was expecting there to be some adjustment period while we all got used to each other again, but I was not expecting the curve ball he threw my way today. He offered to make dinner! He’s in the kitchen right now cooking up some sort of lentil stew thing that he learned to make on one of the organic farms. And he plans to make bread, too! Be still, my heart!