Skip to content
Today is my father’s 90th birthday! Under normal circumstances 90 is a remarkable milestone but in my father’s case, it’s miraculous. He had a mishap with another bicyclist last October and ended up with 8 broken ribs and a collapsed lung. He was in the hospital for four weeks hooked up to drains, drips, and oxygen. There were many times when we didn’t think he’d make it. And there were many more times when he didn’t want to make it. But all the years of bicycling and skiing paid off and he has made a full recovery in less than 4 months.
To celebrate, he tried skiing yesterday. Here he is, putting on his skis. 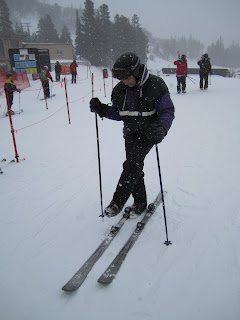 He did great and he had so much fun that when he stopped for lunch, he bought a season pass! That’s it hanging around his neck. Not to take away any of his glory, but I do want to mention that he still wears the ski sweater I knitted for him about 30 years ago. 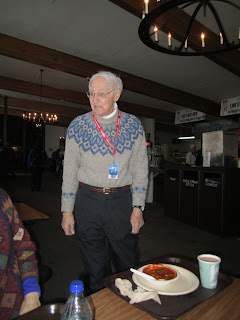