Skip to content
Because I changed my name when I married, it’s a little known fact that my mother is Barbara Walker. Not the Barbara G. Walker of A Treasury of Knitting Patterns fame (which would have been fine), but the Barbara S. Walker of ceramics and sculpture fame. When I was a child, my mother took up ceramics and later became a co-owner of The Lodestone Gallery, a fine craft store here in Boulder, Colorado. She made everything from dishes to lamps to Christmas tree ornaments, then in later years she settled into sculpture. Although she tried to get me interested in clay, I always preferred clean crafts such as sewing, knitting, and embroidery. But I am absolutely certain that I was influenced by my mother’s industriousness and creativity. She, as well as my father (who was a college professor), taught me that it is possible to make an income following your passion. Both of them loved what they did. Through the strength of their example, I gave up the corporate world (I had a MS in geology of all things) to pursue a career in fiber. And I’ve never looked back.
Here are a few photos of my dear mum and her sculptures—the last photo is a bust she made of my dear dad. They set the stage for my very good life. 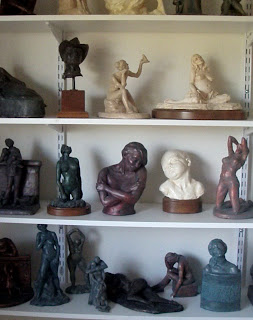 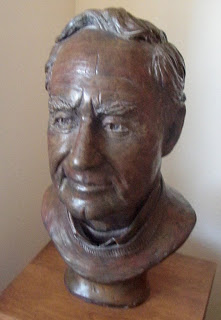