Skip to content
For the past 9 months, our 17-year-old son Alex has been preparing to volunteer in Nicaragua this summer through a program called Amigos de las Americas. The organization has paired teens with community-based initiatives in Central America for well over 40 years. Alex has attended monthly meetings since last October and the entire family has volunteered for fundraising, which included selling and delivering(!) 190 20-lb boxes of oranges and grapefruit.
Alex was scheduled to leave today. Or so we thought. Around noon yesterday I got a phone call from the other Denver-based volunteer assigned to Nicaragua. She was at the airport wondering where to meet us. This is the stuff of nightmares—Alex had misread his ticket and we were all a day off. Fortunately, Alex was at home, but still in bed. I woke him up and after a panic-filled 15 minutes, he was packed and we were on our way to the airport. Miraculously, we made it in time. I figure that the universe must really want him to be in Nicaragua this summer or one of many variables would have misaligned and he would have missed the flight.
I had planned to take a photo of him as he walked down the causeway to the plane, but, well, I forgot my camera in the hustle. So, with very little fanfare, my first-born has taken off to the wilds of a third-world country to teach English and (we think) help train villagers in water purification. When he returns in mid-August, he’ll be 18 years old and a legal adult. Is it trite to wonder where the time has gone?
I was a wreck by the time I got home from the airport. First, I treated myself to a big piece of carrot cake leftover from Father’s Day dinner. 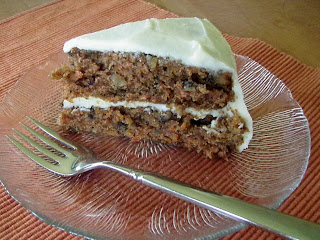 Then, I calmed myself by spinning on my new Maggie spindle. 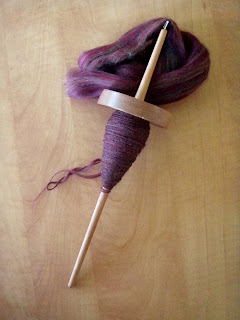 I’m still a wreck 24 hours later; I probably won’t recover until he returns in August.