Shortly after I posted a blog about learning to spin (New Tricks, posted April 2, 2010), I got an email from a reader named Anne in Reading, Pennsylvania. Anne complemented me on my spinning and asked how I went about starting my blog—she’s considering starting one of her own. Of course I replied, but I had to be honest and say that it was all mumbo jumbo to me without the help of a couple of very smart (read that computer-savvy) friends. I could never have figured it out by myself and I was not at all clever enough to help someone else. In response, Anne thanked me for my sparse information. Then she sent me a box of fiber treats to encourage me to keep spinning—five different kinds of prepared fleece, a pile of silk hankies, a dyeing kit, some beads, and even a twisted glass pendant that Anne made herself! 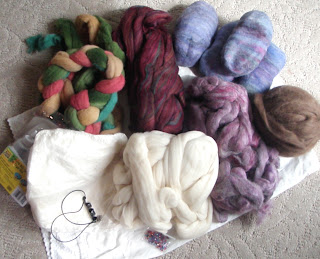 What Anne doesn’t know is that last week I had to return the wheel and spindle that I had on loan during the 5-week spinning class. What she also doesn’t know is that my husband said quite clearly that he hoped I would not take up spinning because, from his perspective, I can’t keep up with everything else and something important like the laundry or cooking dinner would slip. And he’s got a point—there have been many times when both have suffered as I was absorbed in my knitting, writing, editing, or reading. We both know that I don’t have time to knit all the yarn that I already have (but that’s beside the point).

But, now that I have unspun fleece in the house—and a gift no less—I feel a moral obligation to spin it. I figure that through Anne, the universe is telling me not to give up on spinning. Thank you Anne! The Estes Park Wool Festival is in a couple of weeks and I’m sure that there will be a spindle with my name on it.

Ever since the box arrived, I’ve been humming a line from a song Julie Andrews sang in The Sound of Music—“somewhere in my youth or childhood, I must have done something good.”