When I started working at Interweave Press, I thought that photo shoots were the most glamorous aspect of magazine work—the lights, the action, the camera! But it only took me about half a day to realize that taking photos is the hardest part of any publication. Whereas the text requires adequate sentence structure, grammar, and spelling (all of which can be done from the comfort of a chair in a heated room), the photos require so many things to be perfect—the lights, the action, the camera, as well as the model, the setting, the fit of the garment, the styling, etc., and most unpredictable, the weather.

Take last week for example. As the editor of an upcoming knitting book (the title of which I cannot reveal so don’t ask), I attended the photo shoot at the historic Boettcher Mansion on top of Lookout Mountain in Golden, Colorado.

To begin, the stylist laid out wardrobe choices. 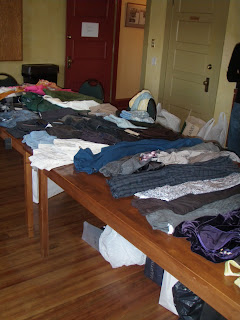 The make-up artist laid out her wares. 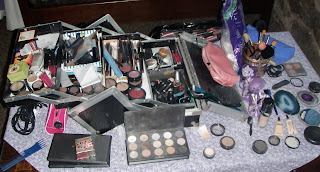 The photographer and his assistants set up their equipment. 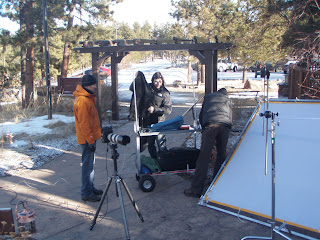 Although it’s not unusual for Colorado temps to hit the 60s in February, the high was in the upper 30s that day (not freezing, but close). But the show must go on. Let me take say that models are saints. They try on outfit after outfit, allow us to poke and pull on their clothing and hair, and not take it personally when we say things like “That looks awful!” And through it all, they look beautiful.

While we are able to wrap up in coats, hats, scarves, and mittens… 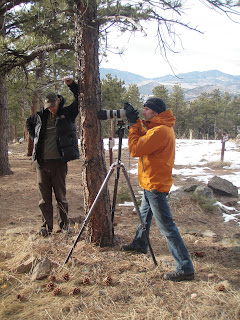 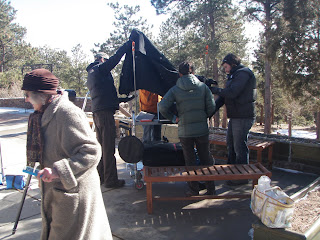 the model—who was a very good sport—has to wear just the garment to be photographed. Fortunately, we were able to sling a coat around her shoulders while the lights and camera were being adjusted. That’s her wrapped up in the full-length down coat (and probably thinking that there’s got to be a better way to make a living). 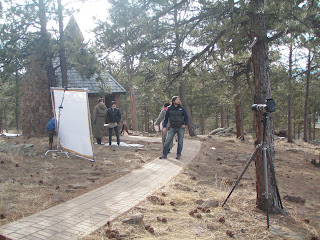 It took me 45 minutes to warm up after that shoot—she’s probably still taking a hot shower.

3 thoughts on “A Recent Photo Shoot”