I’ve often said that I have the best life possible. I always attributed it to the fact that I’m the luckiest person in the world. But it recently occurred to me that I might just be a spoiled brat and I’m coming up with all sorts of evidence for that designation. Over the course of the next few days, I’ll share some of this evidence with you (that which isn’t just too embarrassing for me to admit even to myself).

Evidence #1: I am the youngest of four children. 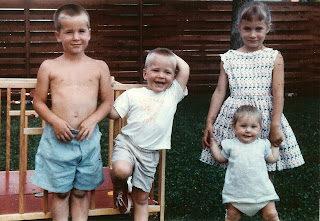 That’s me in the droopy diaper. We all know that the youngest, or baby of the family, has a lot of advantages. My next-older brother’s torments notwithstanding, I had a pretty easy life. My older siblings (especially my next-older brother) wore down my parents so that by the time I was a teenager, they left me pretty much alone. If they did suspect me of any wrong-doing, I blamed it on my next-older brother (and they were all too willing to believe me).

Where are these people now? My sister is a professor at Vanderbilt University. My oldest brother is a mucky-muck HIV/AIDS researcher at Harvard (I’m very proud to claim the same gene pool). My next-older brother is happily retired (who knew?)—I’ll be working until I croak.