I labored this weekend on Cat Bordhi’s Pussy Willow Stockings from page 160 of Sock Knitting Master Class. The socks begin with a most interesting toe, then the gusset increases are worked in a five-row pattern that includes two rows to form a three-stitch eyelet followed by three rows that are worked even. This causes a three-stitch increase every five rows in a diagonal pattern across the instep. 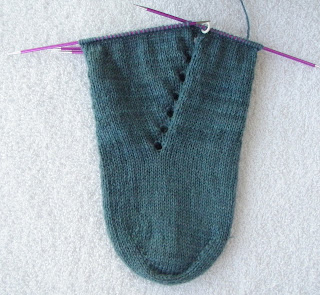 After the heel (which includes a firm heel flap that’s worked by slipping stitches through the back loop), the eyelet pattern changes direction and decreases are added to keep the stitch count constant. 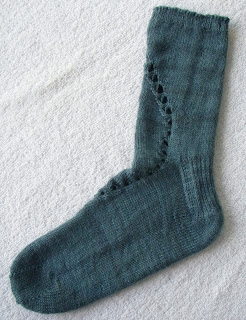 The hardest part for me was keeping track of the three rows worked even between the eyelet increases along the foot. I put a removable marker in a stitch just below the needle on the second eyelet row, then worked even until there were three rows between the marker and the needle.
This pattern is so much fun that I even made great progress on the mate, which has the eyelets travel in the opposite direction (it’s difficult to get a good image while the stitches are on needles). 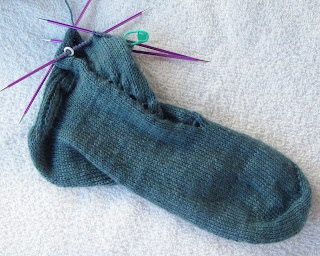 My only changes to the pattern have been to use double-pointed needles instead of two circular needles and to work a few rows of k3, p1 ribbing instead of allowing the sock to roll at the top of the leg.