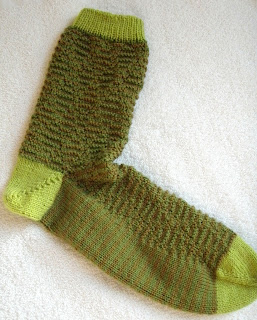 I made the sock a little shorter–it measures just 8″ from the base of the heel instead of 13 1/2″–and I used a contrasting color for the toe, heel, and cuff (I can’t imagine an entire sock–or much of anything else–out of this acid green color).
I also deviated a bit on the short-row heel. Instead of following the wrap-and-turn method that Eunny used, I substituted Priscilla Gibson-Roberts’ yarnover method that’s described on page 133 (for Priscilla’s Bulgarian Blooms).
And, instead of using the decrease bind-off specified in the pattern, I used the tubular method described on page 121.
On to the mate!