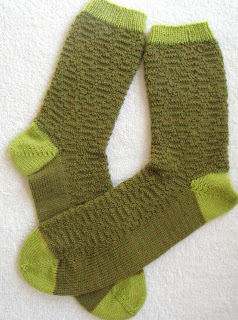 These socks were a lot of fun to knit–shadow knitting is really quite fascinating!
Here’s what I did differently from the instructions in the book:

Unfortunately, the feet are more than an inch too long for the snug fit I like. They measure a whopping 10 3/4″ long from the back of the heel to the tip of the toe, which is appropriate for a U.S. woman’s size 10 shoe. I’ll either have to give them to someone with big feet or rip out to a shorter foot length (about 10 rounds shorter) and reknit the heels and legs. This is what I get for not trying on the socks in progress!