I finally started the next pair of socks in Sock Knitting Master Class. The last pair of top-down socks in the book, Chrissy Gardiners’s Slip-n-Slide use slipped stitches to create embossed patterns down the leg and heel flap and across the top of the instep.For her version, Chrissy used Shalimer Yarns Zoe Sock, which is a soft three-ply 100% superwash merino. 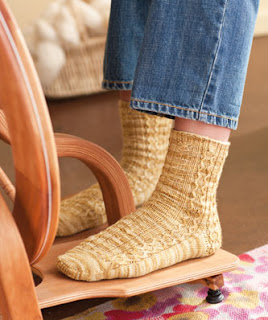 I don’t have any Shalimer yarn in my stash so I’m substituting Solstice Yarns Midsommar Sock (75% superwash merino, 15% cashmere, 10% silk), which is also a soft 3-ply. I obtained this yarn in the colorway Scottish Moss at Sock Summit 2011 in Portland, Oregon, which is where the yarn is hand dyed. I get gauge on size 2 needles. For this pair, I decided to use the magic-loop method (described on page 13) and began with the old Norwegian cast-on (described on page 39).
The socks in the book are a bit small for me so I added 6 more stitches by casting on 68 stitches instead of 62, as instructed. I “hid” the extra stitches in the six k2 columns; working each as k3 instead. This means I’ll have to refigure the heel, gusset, and toe instructions. I’ll outline what I do once I get there. The pattern is easily memorized and the yarn is heaven in the hands so I expect I’ll be done in no time! 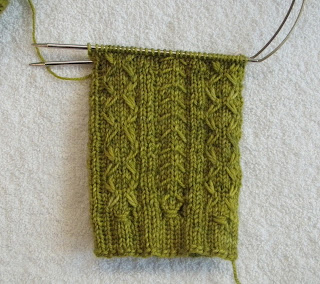 3 thoughts on “Slip-n-Slide, Getting Started”