With the completion of the toe of the first Mock Cables and Lace sock (page 102), I’m officially halfway through Sock Knitting Master Class. 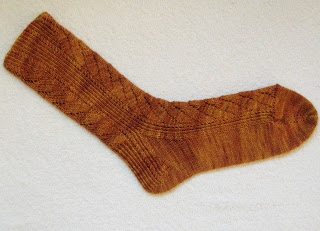 This sock was relatively easy for me since I’d knitted the originals shown in the book and was familiar with the stitch pattern. I’m happy to say that I enjoyed knitting it a third time.
I made the following adjustments to the instructions: