Happy New Year!
Although I don’t make New Year’s resolutions, I do usually reflect on the joys of the previous year, and 2011 was a good one.
The highlights for me were teaching at Sock Summit, Interweave Knitting Lab, and Knitter’s Review Retreat, in addition to teaching at various yarn shops and guilds.
I also attended my first spinning convention at SOAR (SpinOff Autumn Retreat) and I spun yarn and knitted several projects including a pair of socks, a shawl, a scarf, a pair of fingerless mitts, and even a sweater.
Sock Knitting Master Class was published and Knit Handy and Crochet Handy became available as iPhone apps (they tell me droid versions will be available in early 2012).
I managed to write posts for this blog on a somewhat regular schedule and I have become active in the Budd’s Buds group on Ravelry (a forum for questions and discussions about my various books and/or patterns, and an opportunity to comment on and post pictures of any and all variations made of my themes). Please visit!
But one of the best things that happened in 2011 is that my 90-year-old father completely recovered from his bike accident of September, 2010, when he fell on a curb, breaking 8 ribs and puncturing a lung. Four weeks in the hospital didn’t keep him down and he got back on his bike in January. Two days ago, he past the 4,000-mile mark on his odometer for this year! Here’s a photo of him two days ago at the spot where he had his accident. 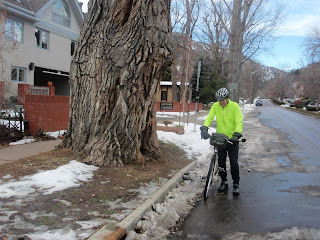 If you ask me, he’s still dangerously close to the fateful curb. And what about all that snow and ice on the street? Is he inspirational or just plain nuts?