I’ve made a lot of progress on my version of Deborah Newton’s Thigh-High Stripes. This is because I chose to shorten the leg considerably and because color stripes always encourage me to keep knitting to see how a new color looks next to the others. Before I could stop myself to take a photo, I finished the entire sock!
It hasn’t been blocked yet so it’s a little wrinkly here, but I’m thoroughly satisfied. 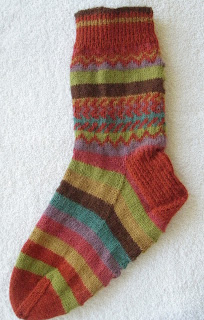 Here are the changes that I made to the original instructions:

Because I love the colors and pattern in these socks, I’m not even daunted by the number of ends that have to be woven in. The sock is sure to look a whole lot better after I weave in the ends and give it a long soak in a warm bath.