Back in June, some friends and I visited a nearby alpaca farm and I got the bonehead idea to challenge my friend Sarah to a friendly competition where we’d split a fleece and each make something with it. We chose the first cut of a fleece taken from a cute Huacaya named Arwen (you can see photos of farm and Arwen on my post for June 26, 2011). Here’s my share of the fleece. 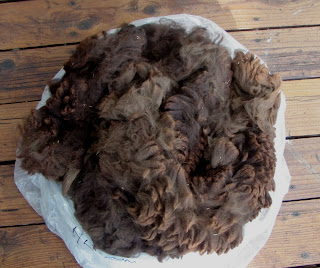 The fleece looked clean at the farm, but when I prepared to wash it I discovered a lot of sand, dust, and bits of grass. I washed it a few times but couldn’t shake the sinking feeling that this was going to be a bigger job than I thought, especially once I started picking through the fleece to open the fibers in preparation for spinning. I worked on it on and off since July and finally have collected the “clean” fiber. I think I discarded nearly a third of the original. 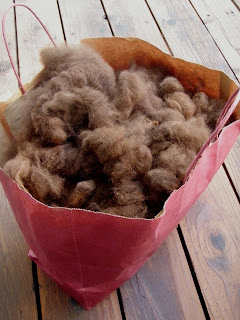 When I bought the fleece, I didn’t stop to think that I don’t have carders. And I didn’t realize that alpaca requires different carders than wool. Fortunately, I have friends that spin and one of them (thank you Maggie!) loaned me a drum carder appropriate for the fine fleece. I set up the drum carder on the back deck and got to work. 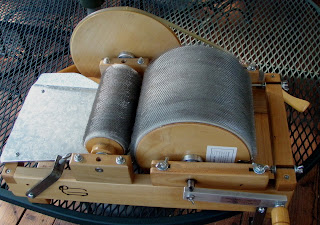 Unfortunately, this particular drum carder is quite old and the drive band wasn’t up to the task. Three times the plastic band snapped and three times I tried to melt the ends back together. On the last try, I wrapped the join with packing tape as well. But it was no use. The darn thing wouldn’t hold together. 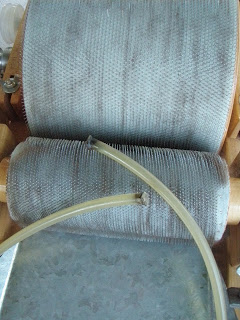 So I ended up rotating the small drum manually with my right hand as I used my left to turn the crank to rotate the large drum. It took a couple of days (and a few puncture wounds) to get through all of the fleece. There is still more grass and dust in the fleece than I’d like, but I’ve made it this far and I’m determined to finish. I have about 40 batts, each weighing about 6 grams, which means that I have about 8 ounces of prepared fiber. I have no idea what I’ll make. Whatever it is, it will have to have a rustic feel. Suggestions anyone? 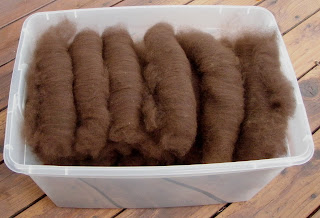