I followed the advice Judith MacKenzie McCuin gives in The Intentional Spinner and have been spinning all the singles I’ll need for my handspun sweater before I start to ply. As of today, I have 9 bobbins, each with about 100 grams of singles. Judith advises pairing the bobbins so that the thin and thick singles will even out overall. Problem is, the thickness ranges within each bobbin. I have no idea which ones might be a little thinner are which might be a little thicker. Therefore, I plan to grab the bobbins randomly when it’s time to spin. At this point, my plan is to make a 3-ply yarn that will be between sport and worsted weight. But who know? It may end up bulky weight even though I tried to spin fine singles. 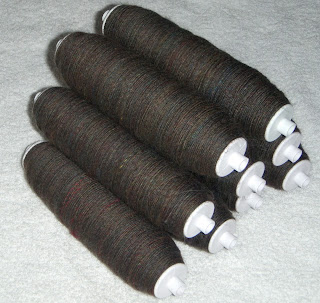