Skip to content
It’s been more than a week since my last post and I’m feeling a little guilty. Here’s what’s kept me away from my computer.
Last week, our son Alex returned safely from Nicaragua. I’m happy to report that he looks and acts much the same as when he left. He had a fantastic time and is considering returning in a couple of years as a supervisor; he’s already talked on the phone with a few of the families he met. School starts tomorrow so he’s been off with his friends most of the time. I did catch him relaxing in the hammock he bought before he boarded the plane home. 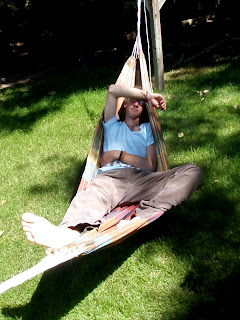 I finished the repeat Beginning Spinning course I signed up for this summer. I have 930 amazing yards of two-ply Corriedale yarn to show for it. I haven’t decided what to do with this yarn—maybe a vest or some tightly knit, highly textured mittens. For now, I’m happy to just admire how clever it makes me feel. 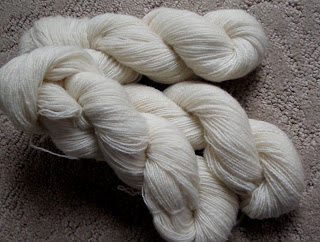 I also knitted a pair of socks with my handspun for SpinOff magazine (it won’t be published for a few months) and a pair of gloves for Piecework (which also won’t be published for a few months). I bought the fleece for the socks (100% superwash merino) from Traci Bunkers at The Estes Park Wool Market in June. I spun the yarn on a spindle I bought the same day, then plied it with a wheel I borrowed during the spinning class. I purposefully spun the yarn as thin as I could, but after I plied and washed it, it came out more of a sportweight than the fingering weight I was after. To make sure I had enough yarn, I worked a short-row heel (which I believe uses less yarn than the more traditional round heel with gusset). I always count the number of rows in the leg and foot of a sock so that I can knit the mate to match. What I failed to take into account is that my handspun is not as uniform at mill-spun. One of the socks is considerably larger than the other. One of my feet is bigger so maybe this won’t be a problem.
I used the new Quince & Co Chickadee yarn for the gloves. It was a dream to knit with and I couldn’t be happier with the stitch definition! 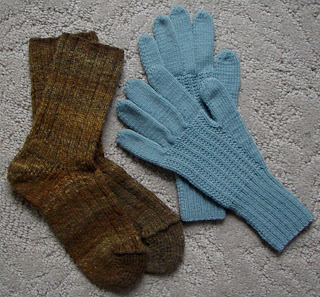 I’ve also been experimenting with different ways to work a round heel on toe-up socks. This is the type of three-part heel that you usually see on top-down socks: heel flap, heel turn, and gussets. I’ve knitted five full-size samples and several small sections of just the heel turn. I’m getting close to working out my favorite method for various sizes and gauges. Stay tuned.