Okay, the heel on Kathryn Alexander’s Mitered Triangles socks (from New Directions in Sock Knitting), made up of four short-row triangles, is unlike any other I’ve ever seen and it takes a bit of faith. Unfortunately, there’s an error in the instructions (sigh, no matter how many times a number of us read the instructions, errors do pop up from time to time). Please accept my apologies. 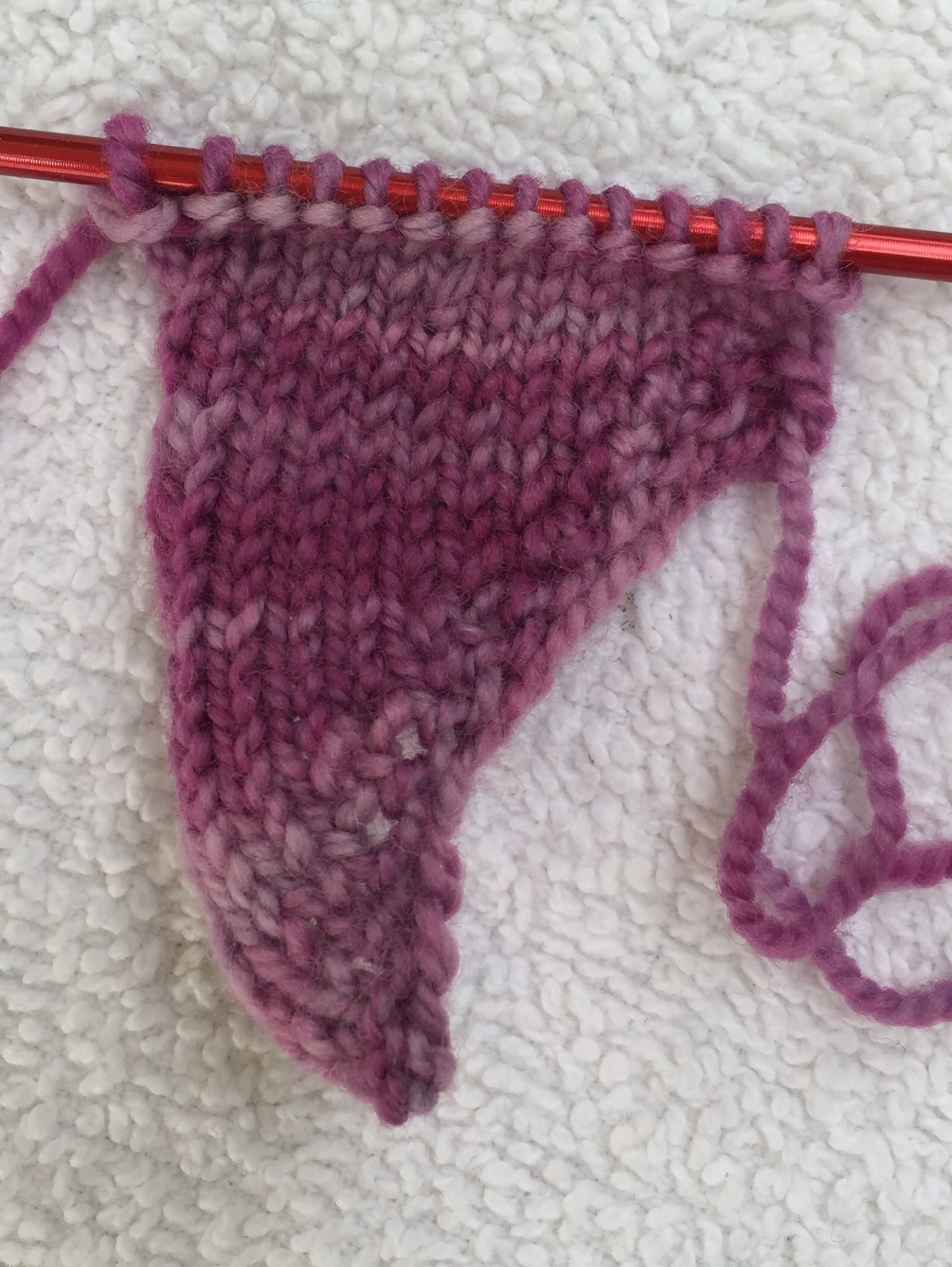 Once you get the cast-on right, the First Heel Triangle (shown in pink) is a breeze — it’s just like triangles worked for the Front and Back Panels, although the first two rows are worked with the tail instead of the working yarn.

The Second Heel Triangle (shown below in blue) also begins with stitches cast-on using the backward-loop method, followed by one row worked with the tail. 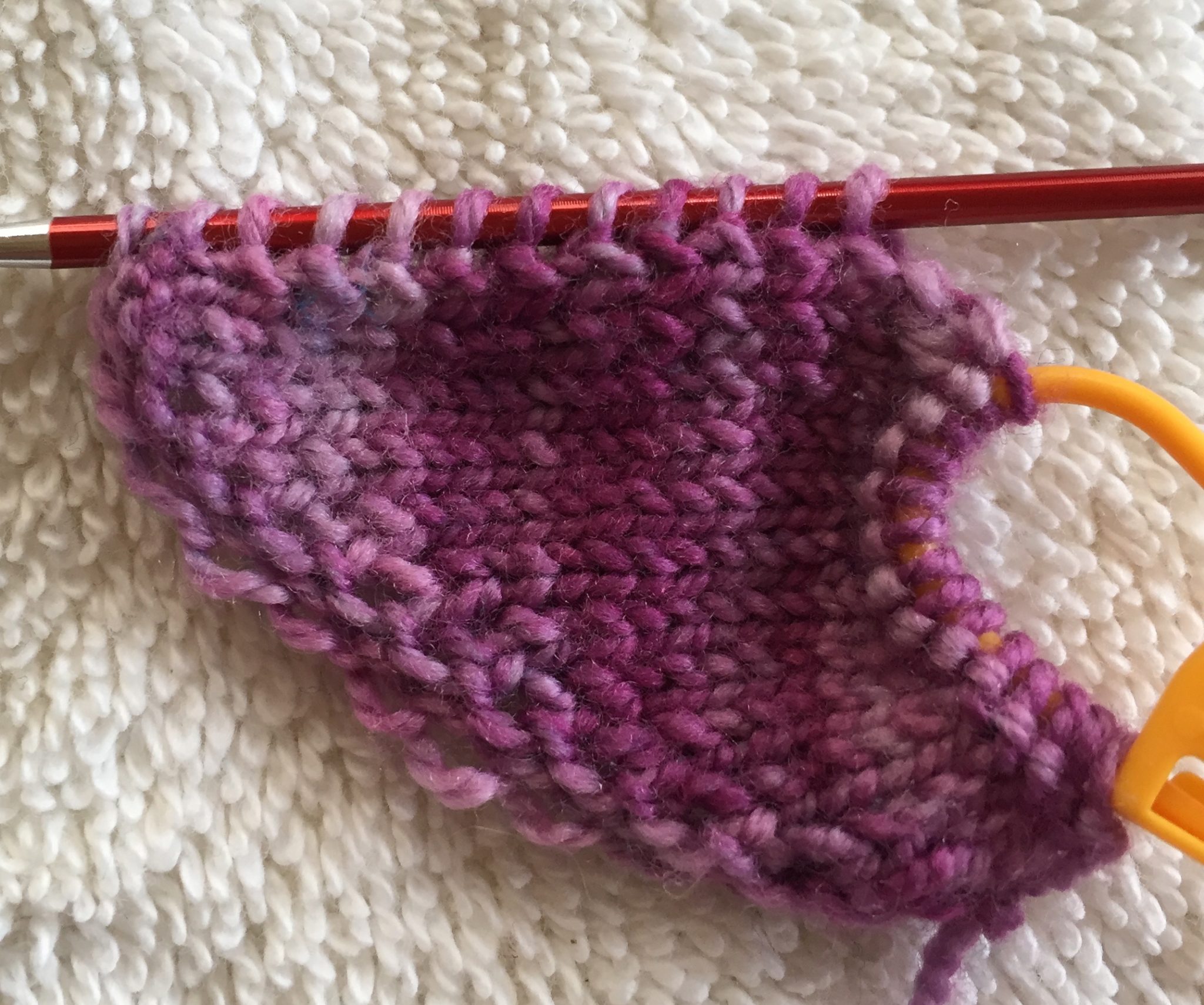 I found it easier to lift all of the loops onto a spare needle so that I was sure to have the correct number of loops. For ease of picking up, I inserted the needle into each loop from front to back, opposite of the normal stitch mount (the leading leg of the loop is in the back of the needle instead of in the front of the needle).

It’s important to note that you’ll need to lift 2 fewer loops of the First Triangle that there are stitches cast on for the Second Triangle. If you’re following the instructions as written, you’ll want to lift 10 stitches from the First Heel Triangle. Because I increased my triangles to 12 stitches, I lifted 12 loops, as shown above. 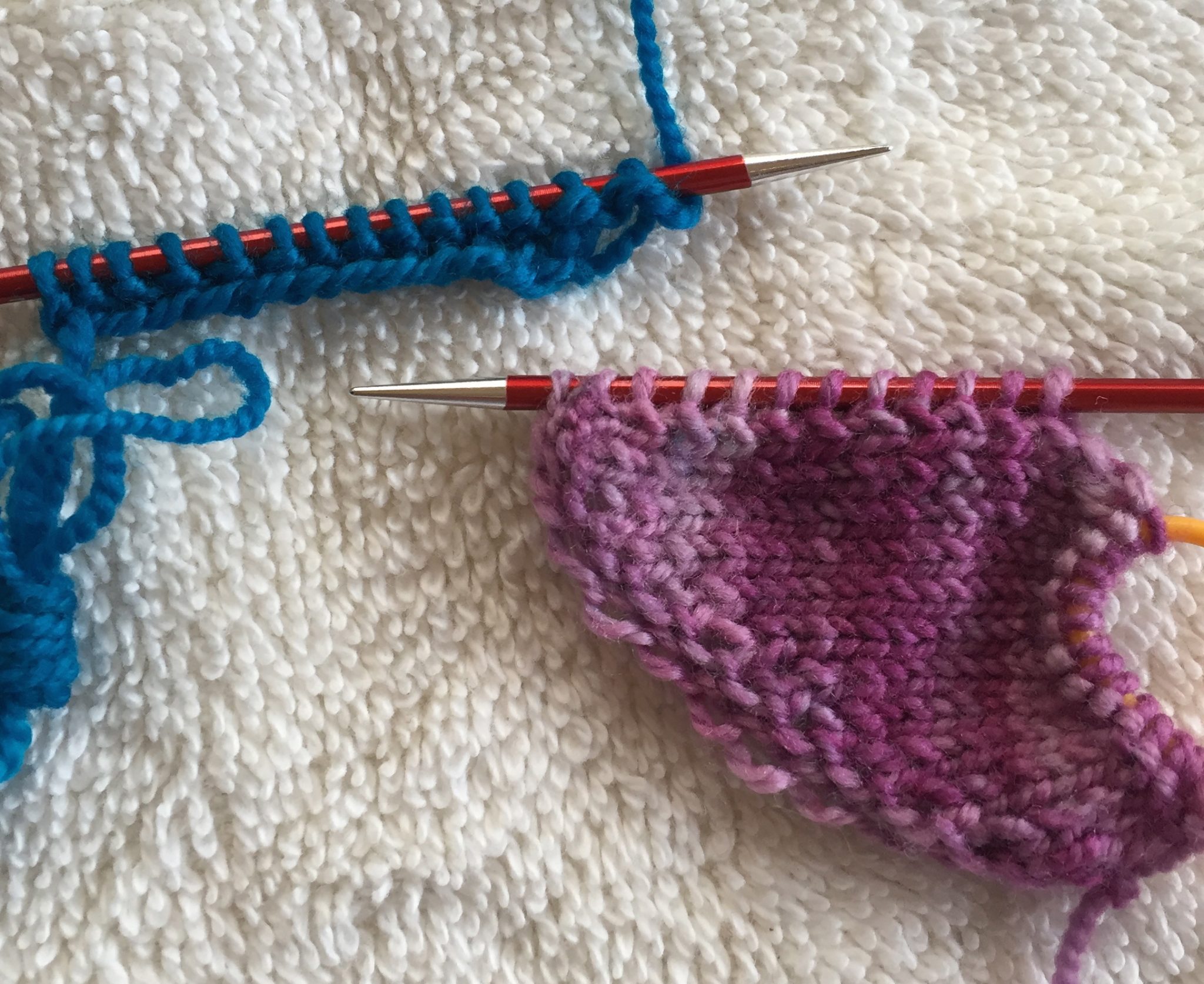 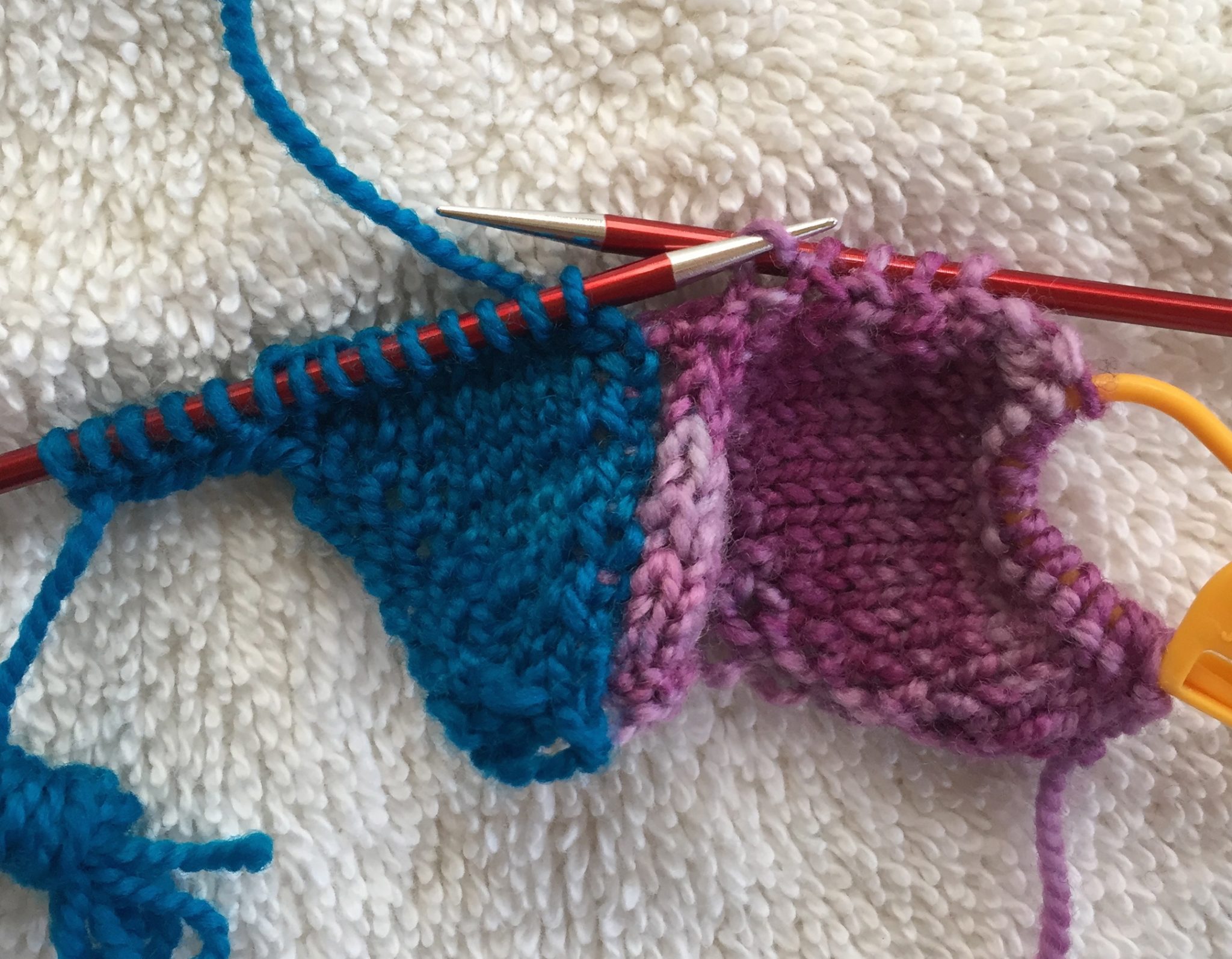 Because I picked up the loops on the pink triangle from front to back, I had to correct the mount of each lifted loop when I transferred it to the left needle in preparation to work it together with the first stitch of blue triangle, as shown at left. 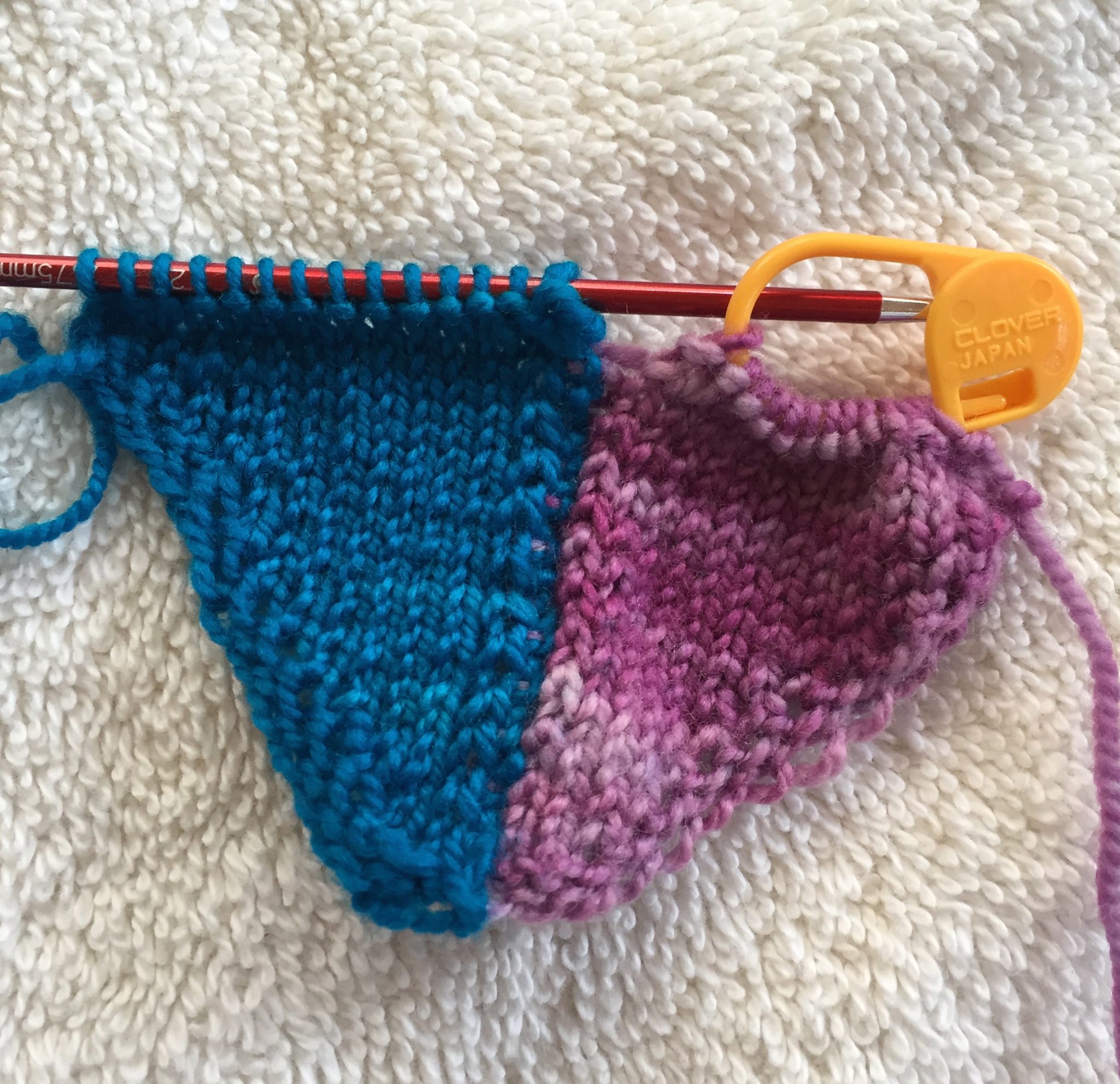 When the two triangles are joined, the live stitches of both triangles will be adjacent to each other (blue stitches on the needle; pink stitches on a holder). There is a garter (purl) row along the outside edge of each triangle.

If you see specks of the First Heel Triangle color peeking through along the join, simply give a good tug between the two triangle to make them ease their way to the back of the work.

The Third and Fourth Heel Triangles are worked exactly the same as the First and Second, even with the same colors. In my next post, I’ll show how the heel is completed.