Son of a Goat Herder 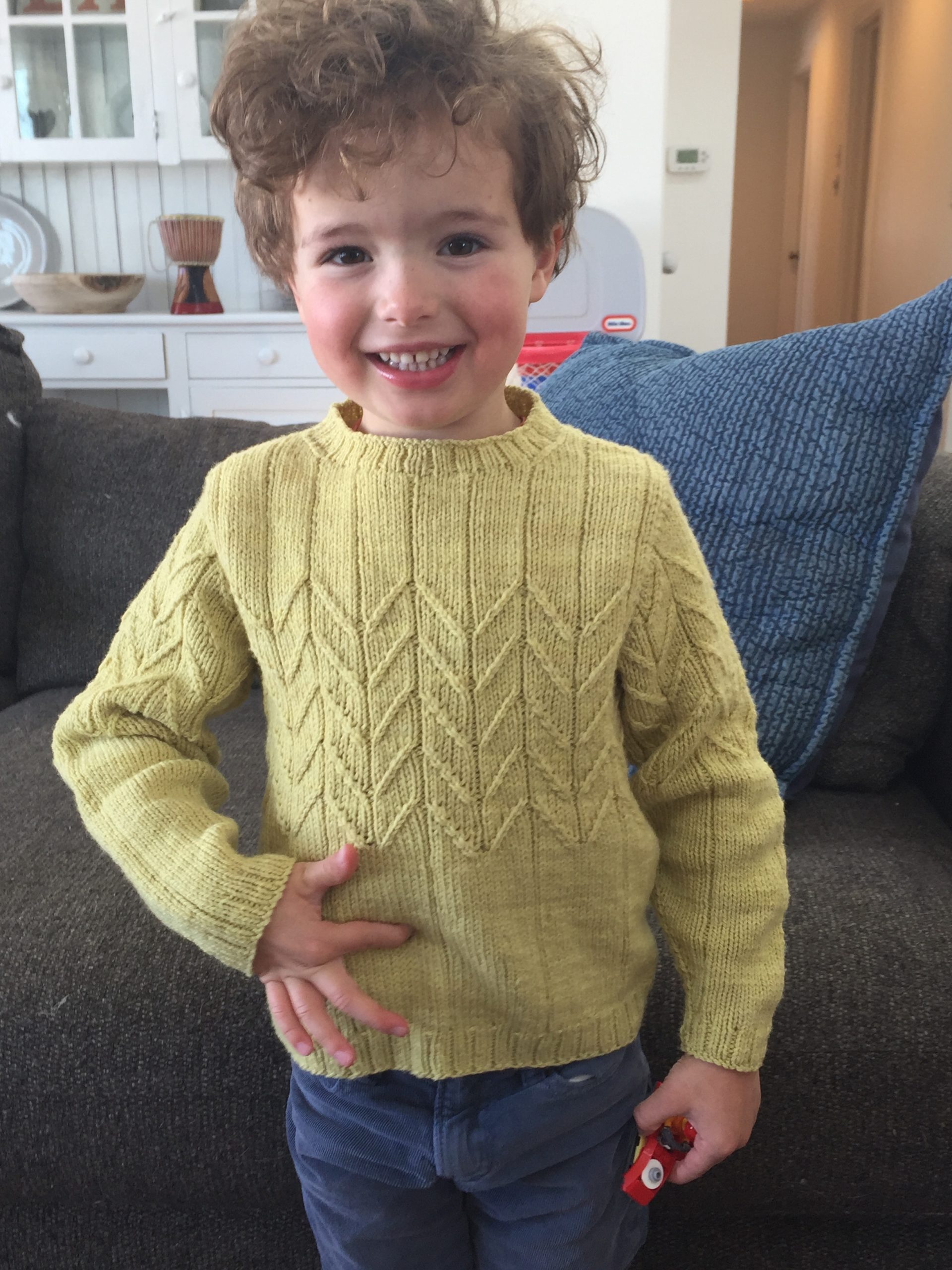 In response to the popularity of my adult-sized Goat Herder and infant/toddler-sized Junior Goat Herder pullovers (both available on Ravelry), I’ve reworked the design in sportweight yarn for in-between sizes of 3 to 12 years and named it Son of a Goat Herder.

Like it’s siblings, wide ribs in the lower body give way to a chevron pattern worked with twisted stitches—no cable needle is necessary! The body is worked in rounds from the hem to the armholes, then the back and front are worked separately in rows to the shoulders. Stitches are picked up around the armholes, the sleeve caps are shaped with short-rows, then the rest of the sleeves are worked in rounds down to the cuffs. There are no seams to sew. 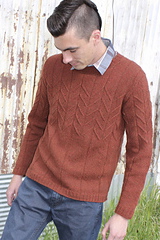 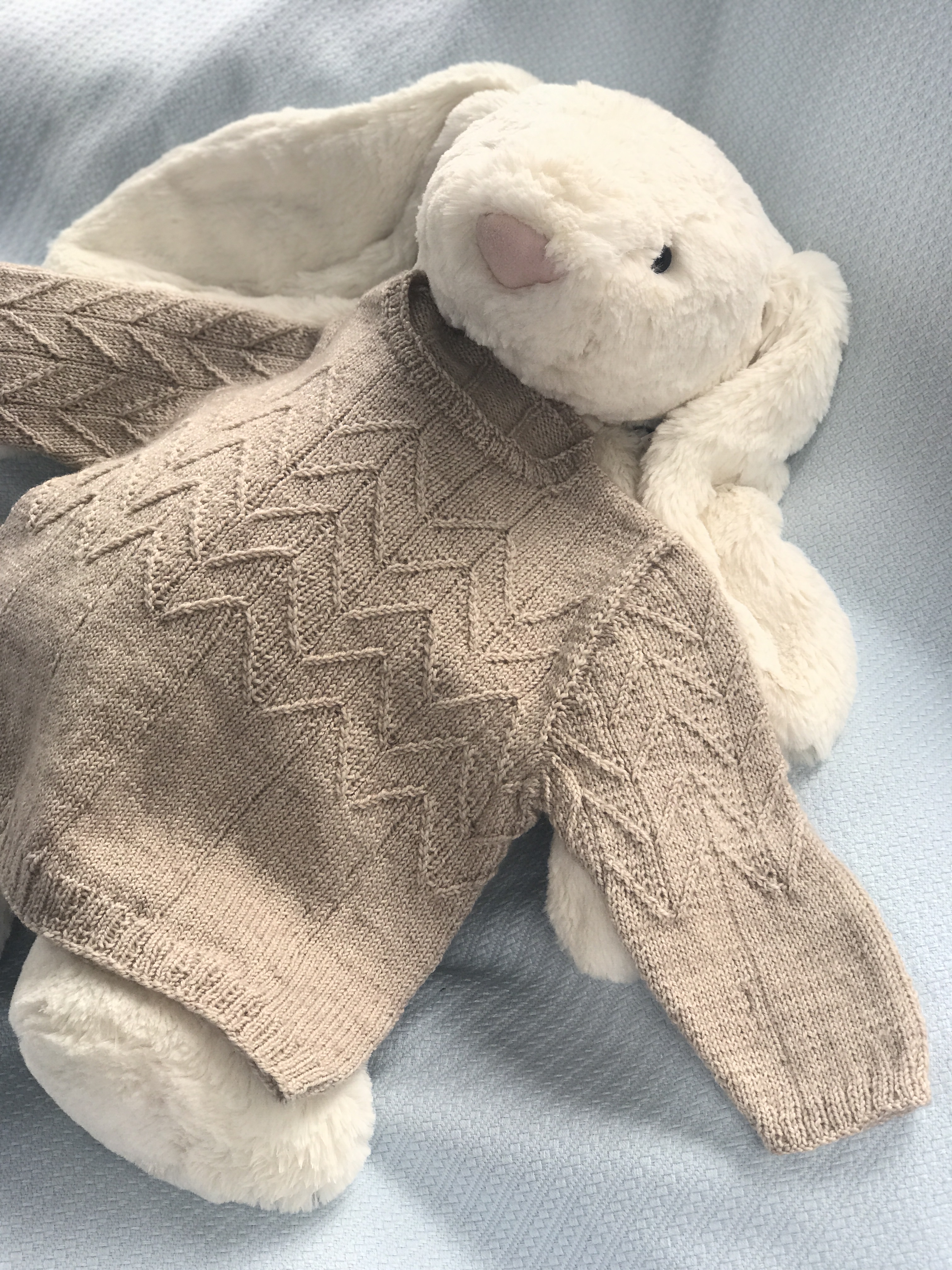 I do hope you and yours are safe and well. The corona virus epidemic has certainly changed life as we know it.

The practice of social distancing has its challenges, but I’m keeping up with friends and family through video conferencing (in-person meetings may become obsolete!). I’m entertaining myself by learning to cook with what’s on hand, binge watching PBS shows, and, of course, knitting.

Sadly, social distancing has caused a lot of small businesses to suffer reduced sales. Most of those in the fiber industry, who don’t have much of a cushion to begin with, are truly struggling. To encourage yarn purchases, I’m discounting all of my independent patterns (those published through Ann Budd Knits) in my Ravelry store through midnight Friday, March 30. Use the one-time code KNIT! to receive 50% off the regular price of these patterns.

Thank you all for jumping in the raffle for one of my books. It’s especially nice for me to see so many comments on a blog post!

After drawing Roxanne’s name, I was feeling generous and drew a second winner.

The second winner is Karen Berger, who wrote: “I would be very happy to win a copy of Simple Style. Thanks for the raffle!”

Congratulations Roxanne and Karen. Please reply to me at annbudd@annbuddknits.com to give me your mailing addresses. 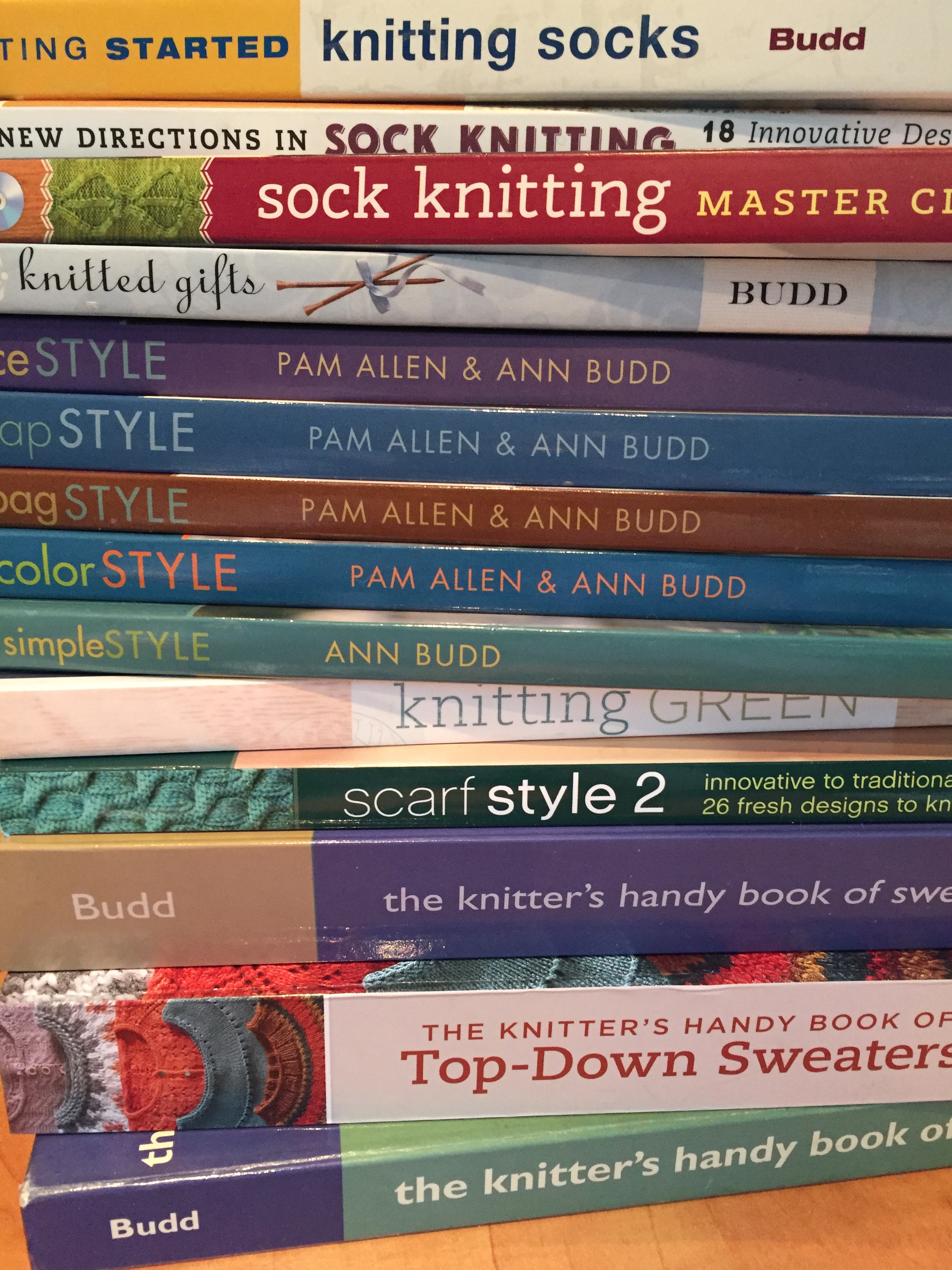 In appreciation for the joys I get from knitting and helping people knit, I’d like to give away one of my books.

Tell me which title you’d like to win and why, and I’ll enter your name in a drawing for a free copy. You can find all of my titles on at annbuddknits.com — click on books.

The winner will be announced Tuesday, March 17. 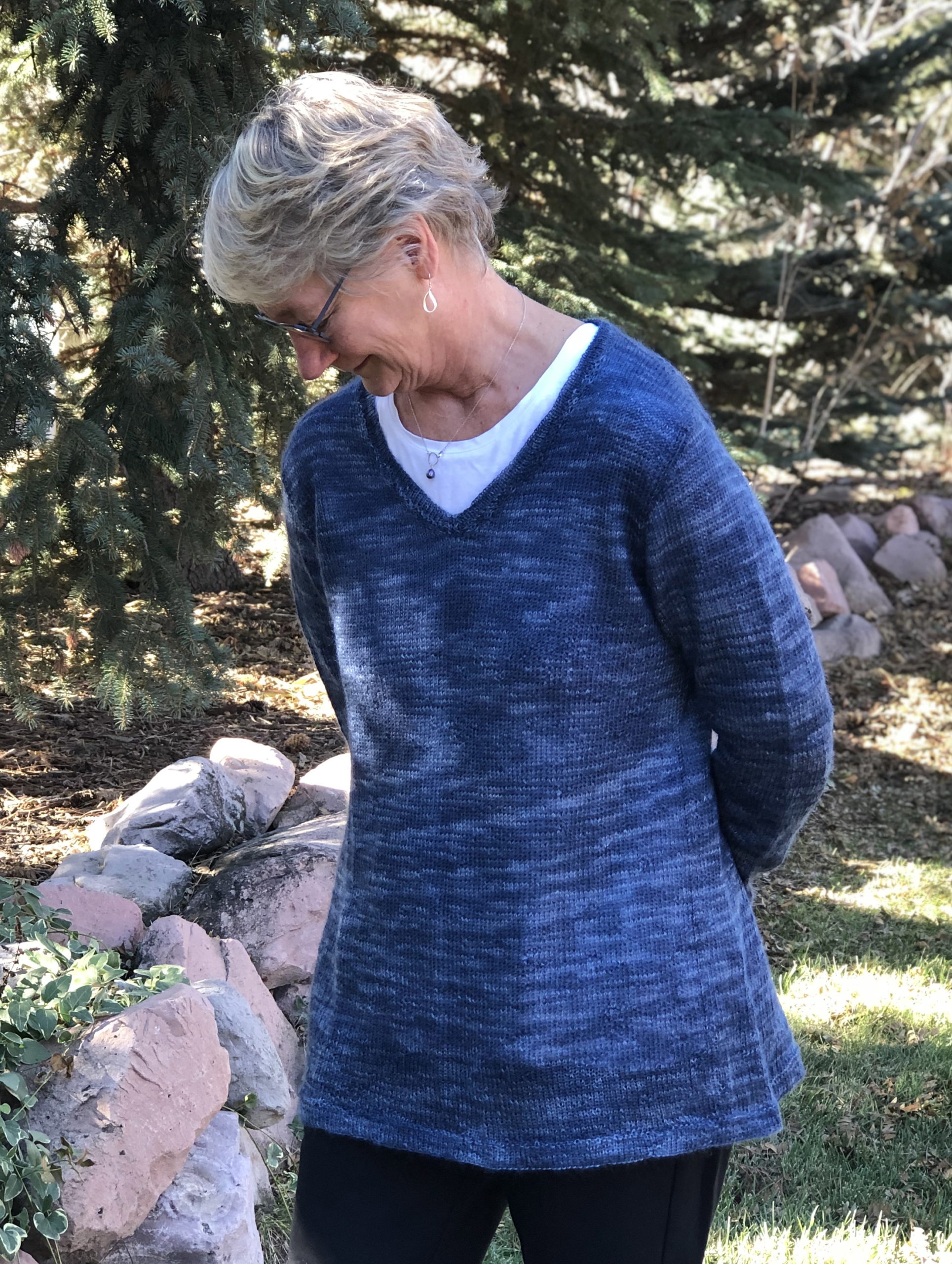 This pullover version of my top-down Port Townsend Swing Cardigan features a V-neck, long set-in sleeves, folded hems, and an A-line silhouette achieved through mirrored increases worked along the center back. 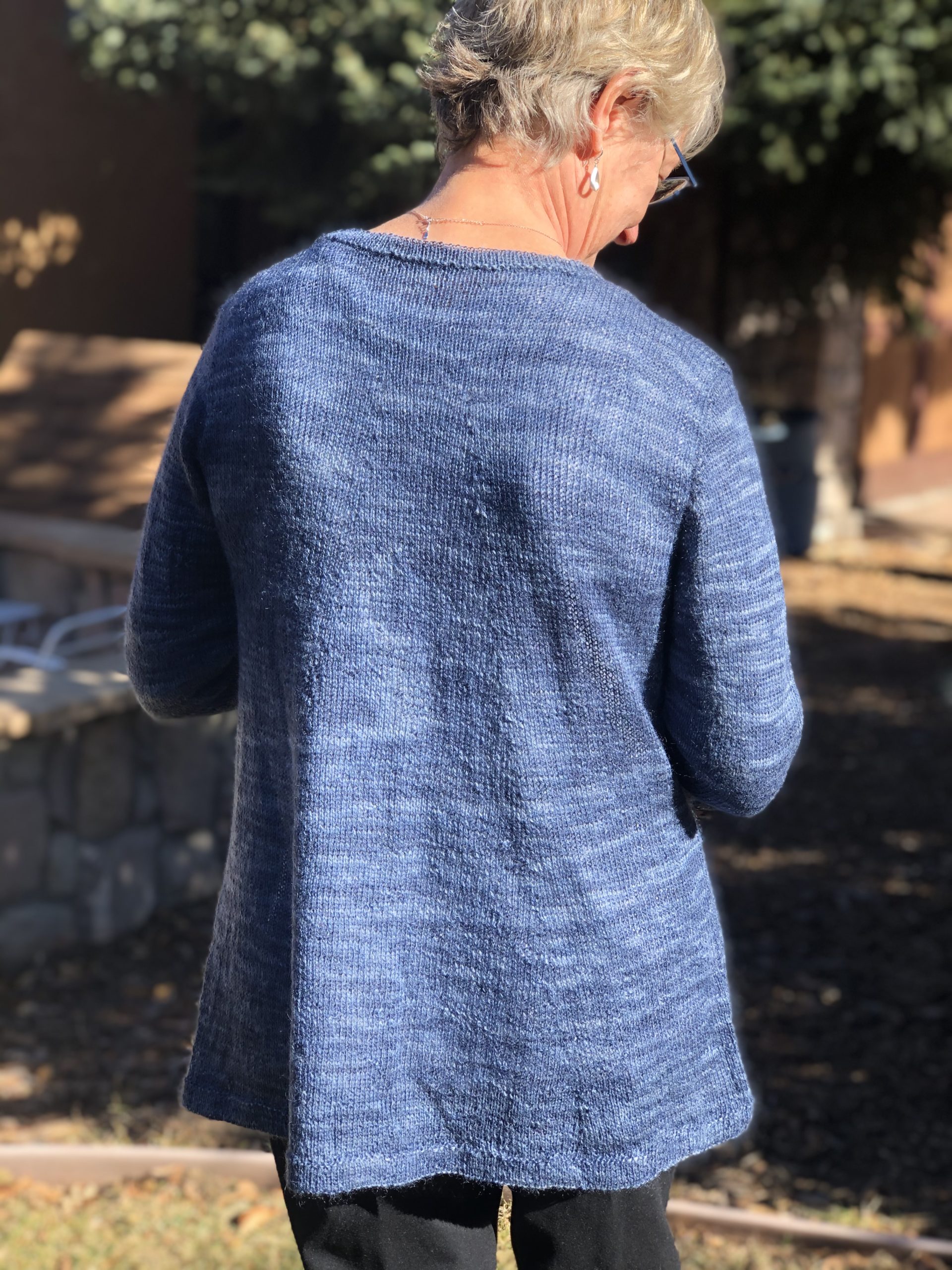 The yarn, Colinton Australia Lace Blends, is a luxurious blend of 80% fine mohair and 20% silk that is hand-dyed in Australia and exclusively distributed in the U.S. by The Bazaar Girls Yarn Emporium in Port Townsend, Washington.

You can get 20% off the purchase price of Port Townsend Swing Pullover by using the code SWING! by midnight Mountain Standard Time Saturday, March 7, 2020.

Looking Forward to the Longest Day

I’ve been in a bit of a nesting/cleaning mode the past few weeks. 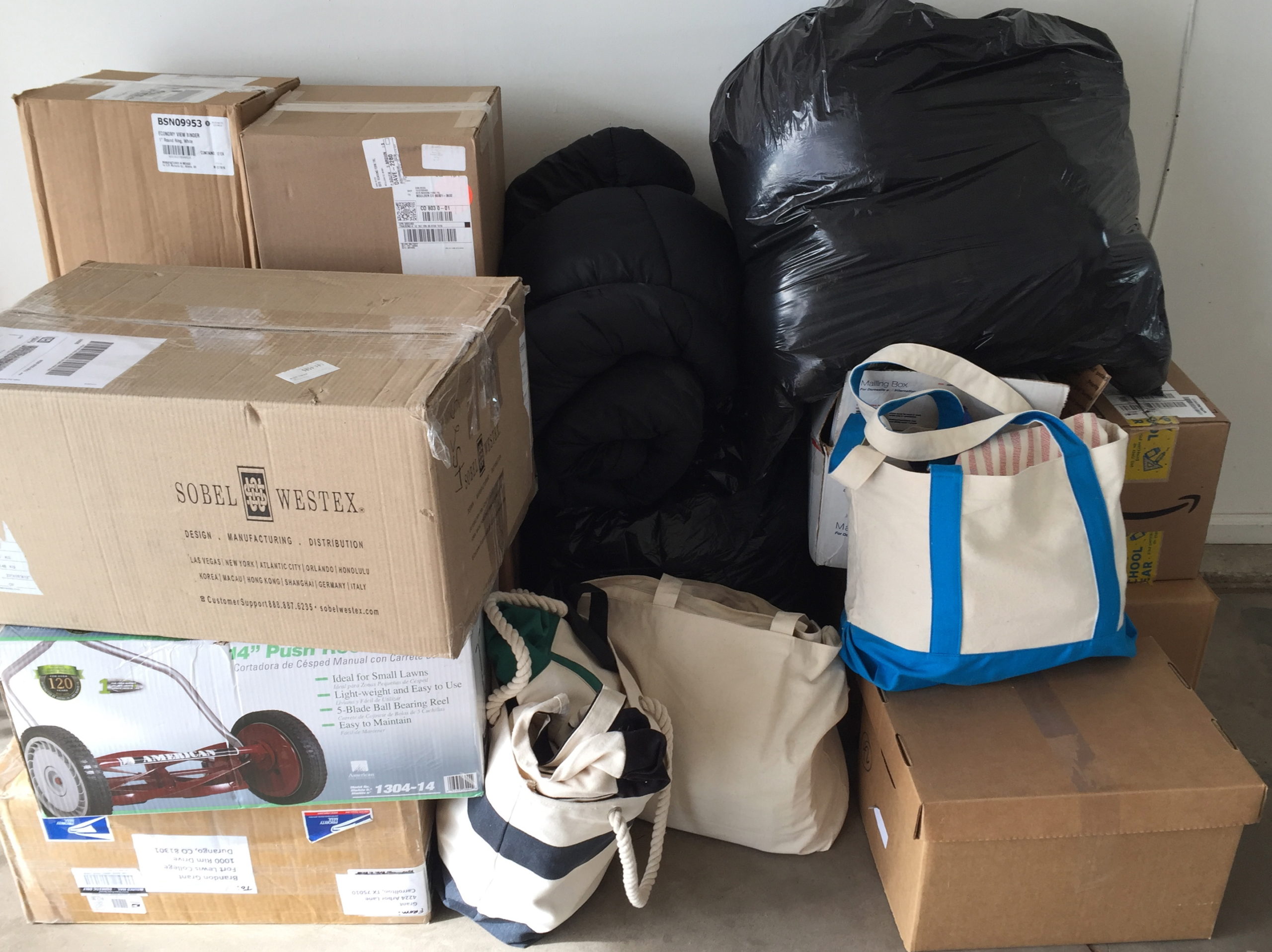 So far, I’ve gone through 80% of the closets, drawers, and cabinets in my house (excluding my yarn stash) and have donated boxes and bags of excess clothing and household items to charity. Honestly, I believe the gust of wind you might have felt was my house exhaling a huge sigh of relief.

I bragged to my knitting group about my progress and one knitter nodded her head and said, “Oh, yes. Swedish death cleaning.” I had never heard of such of thing (my roots are Norwegian, not Swedish) and thought she was kidding. 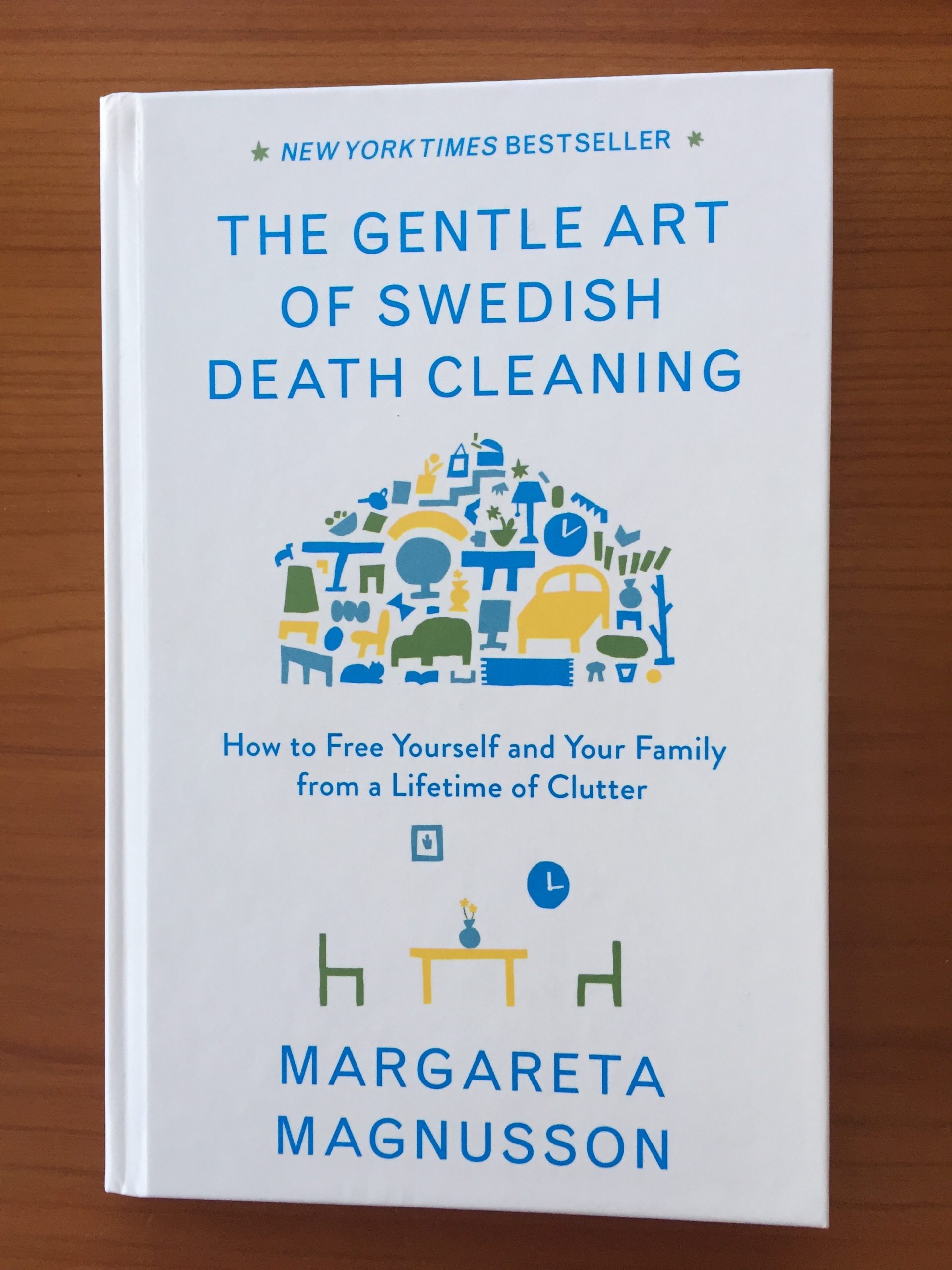 She has since loaned me a fascinating book written in 2018 by a woman “somewhere between eighty and one hundred years old” who has death cleaned for so many others that she’s “dammed if someone else [will have] to death clean after [her].” Having cleaned out my parents’ house, I completely agree with her. With the exception of my precious yarn stash, which my family knows to distribute among my knitting friends, I don’t want my husband, kids, or siblings to have to deal with what they will see only as clutter.

Perhaps I’m procrastinating on “more important” work that has to be done at my desk, but I now feel the need to revisit all those closets, drawers, and cabinets for a second sweep!

Tune In for Off The Cuff

If you’re interested in joining in a live interactive interview with me, you’ll get your chance Saturday, February 8 at 3:00pm Pacific Time. My interviewer will be Suzanne Bryan, 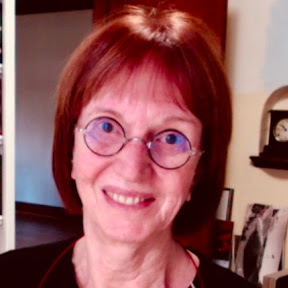 a TKGA Master Hand Knitter who has served several years as co-chair of the review committee.
Suzanne has several sweater tutorials (worldwide) that use The Knitter’s Handy Book of Sweater Patterns (written by yours truly), starting with a gauge swatch and personal measurements, then guiding listeners through using my book and her tips and tricks to design their own sweaters.
Recently, Suzanne has started doing livestream YouTube interviews, called Off The Cuff, with her knitting heroes. Claiming that I’m one of them, she asked me to participate. The live interview will take place Saturday, February 8 at 3:00pm Pacific Time.
Here’s the link: youtube.com/watch?v=2cBXjYuCC7M
Suzanne assures me that it will be fun. I just hope that I remain one of her knitting heroes when the interview is over.
January 28, 2020 5:31 AM · in life long learning | Comments

Spoiler Alert: This post has nothing to do with knitting.

A few nights ago a group of four of us joined about twenty other budding artists at Posh Splat, Boulder’s local paint and wine studio.

Back in my formative school years, I took a lot of art classes and briefly considered it as a vocation. Forty-some years later, my youthful dreams have yet to be realized. So, as you might imagine, I was delighted for the opportunity to try my hand at painting.

At Posh Splat, each “artist” is given a blank 16″ x 20″ (40.5 x 51 cm) canvas, three paintbrushes, and a squirt each of seven colors (blue, red, yellow, green, brown, black, and white). An instructor leads the class in choosing the right brushes, mixing the appropriate colors, and making the correct brush strokes, all while giving encouragement (and serving wine to help the creative juices flow).

The painting of the night was Vincent Van Gogh’s 1888 painting Cafe Terrace At Night (shown at left below). Instead of following the actual masterpiece (which would have been paralyzingly intimidating), we followed a much simplified version with fewer buildings and without the human forms (that’s my attempt on the right). 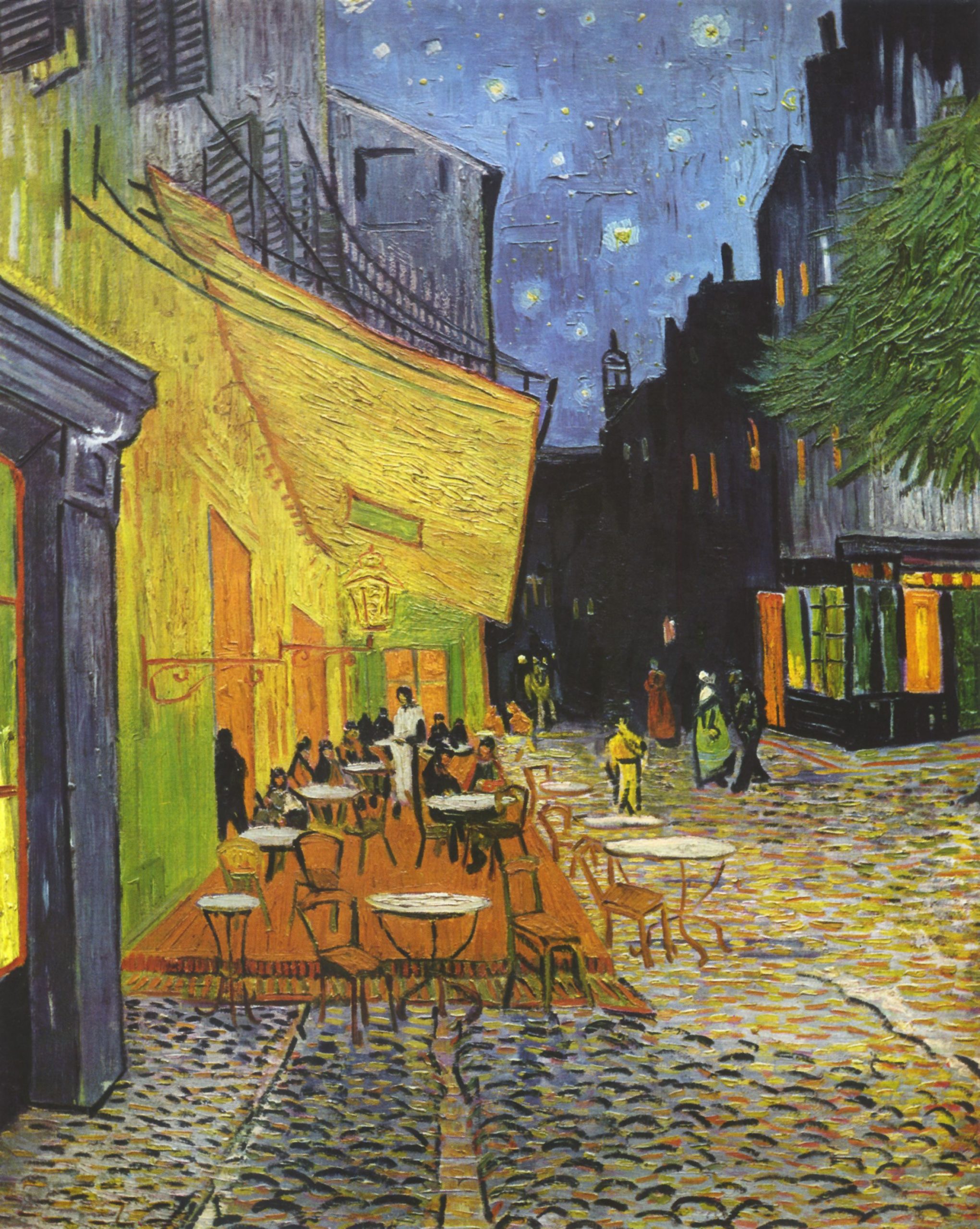 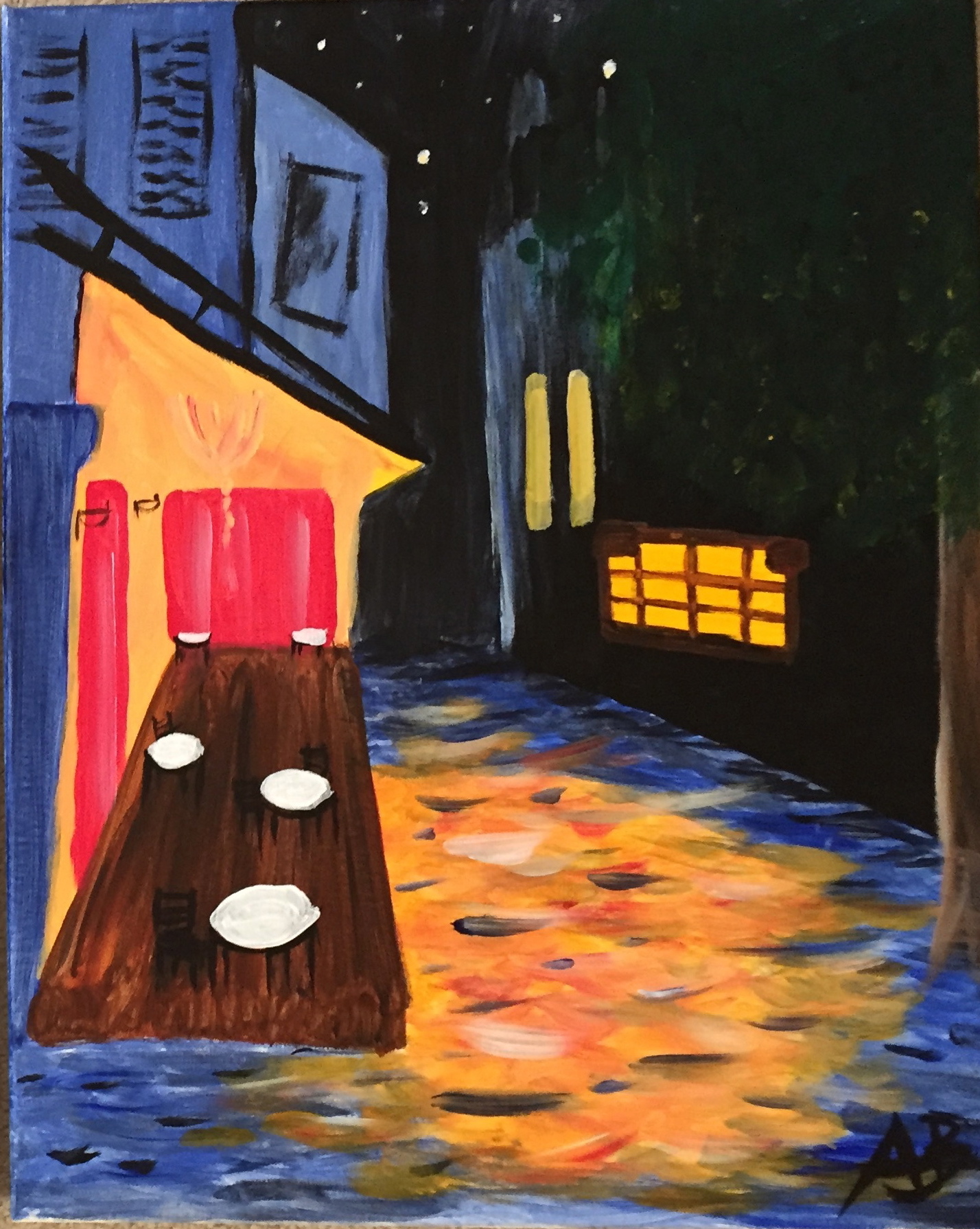 Needless to say, I think I was wise to stick to my knitting!

Not Home for the Holidays 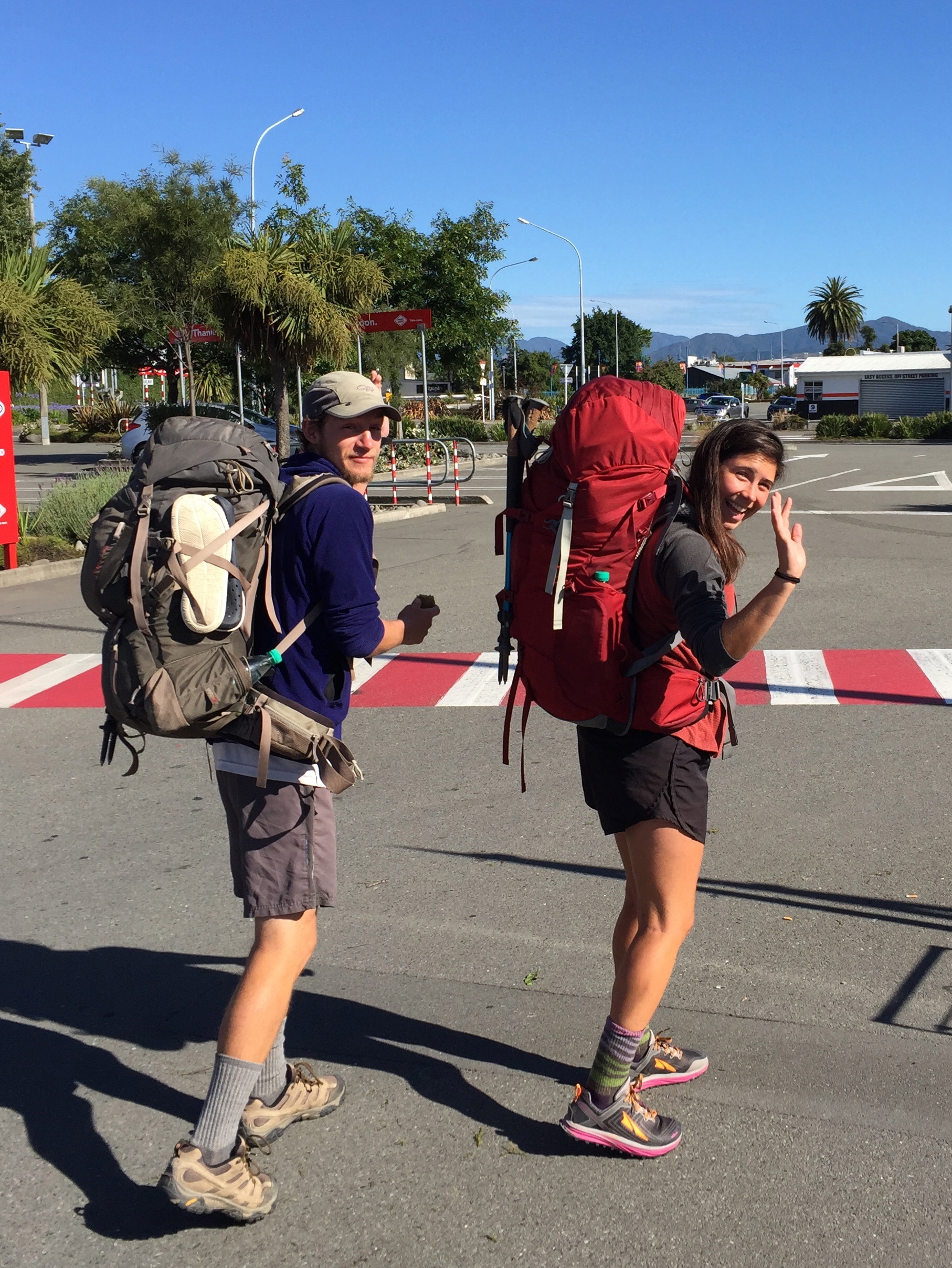 This year my husband and I turned from tradition and did not stay home for the holidays. Instead, we went to New Zealand where we met up with Twin 1 and his most excellent girlfriend, who are following the Te Araroa trail from the northern tip of the North Island to the southern tip of the South Island. I’m insanely impressed by their sense of adventure that requires 4 months of backpacking along 3,000 km of trails.

We spent three days with the kids, during which time we fed them and put them up in hotels where they could shower and do laundry. We filled their backpacks with food and sent them on their way.

My husband and I then embarked on a 12-day trip of both islands. I took what for me was a lot of photos, but they don’t do justice to the spectacular scenery. 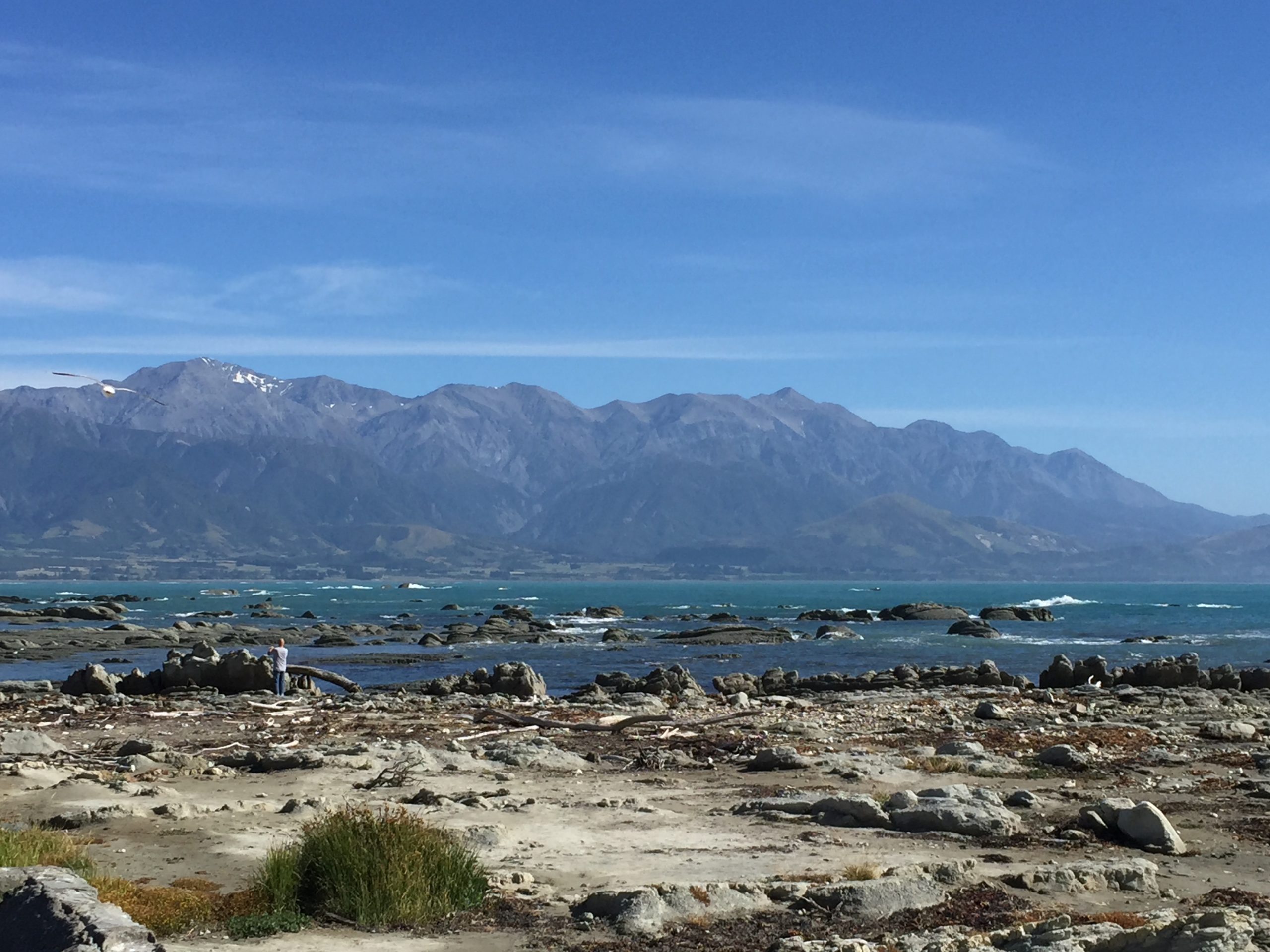 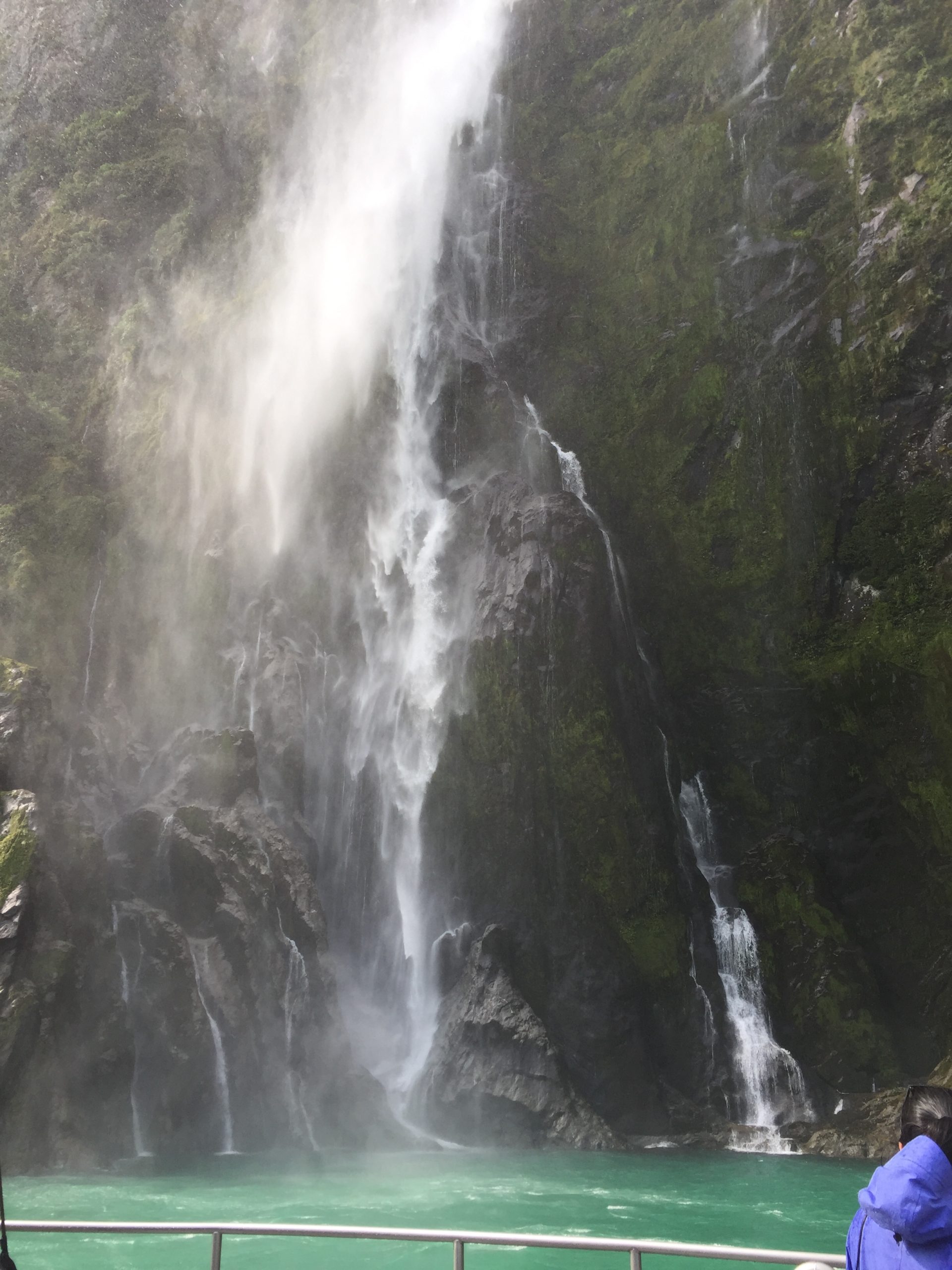 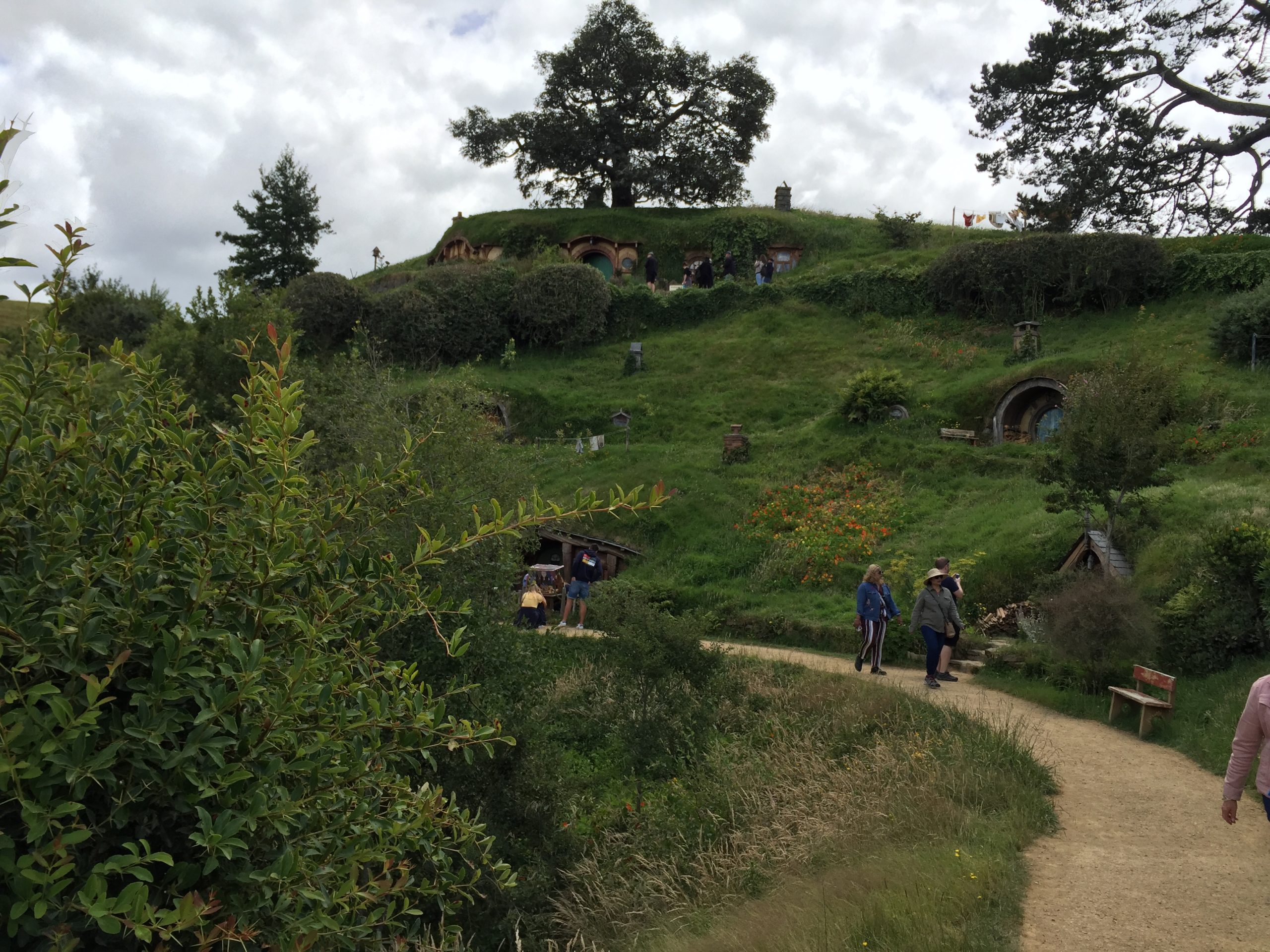 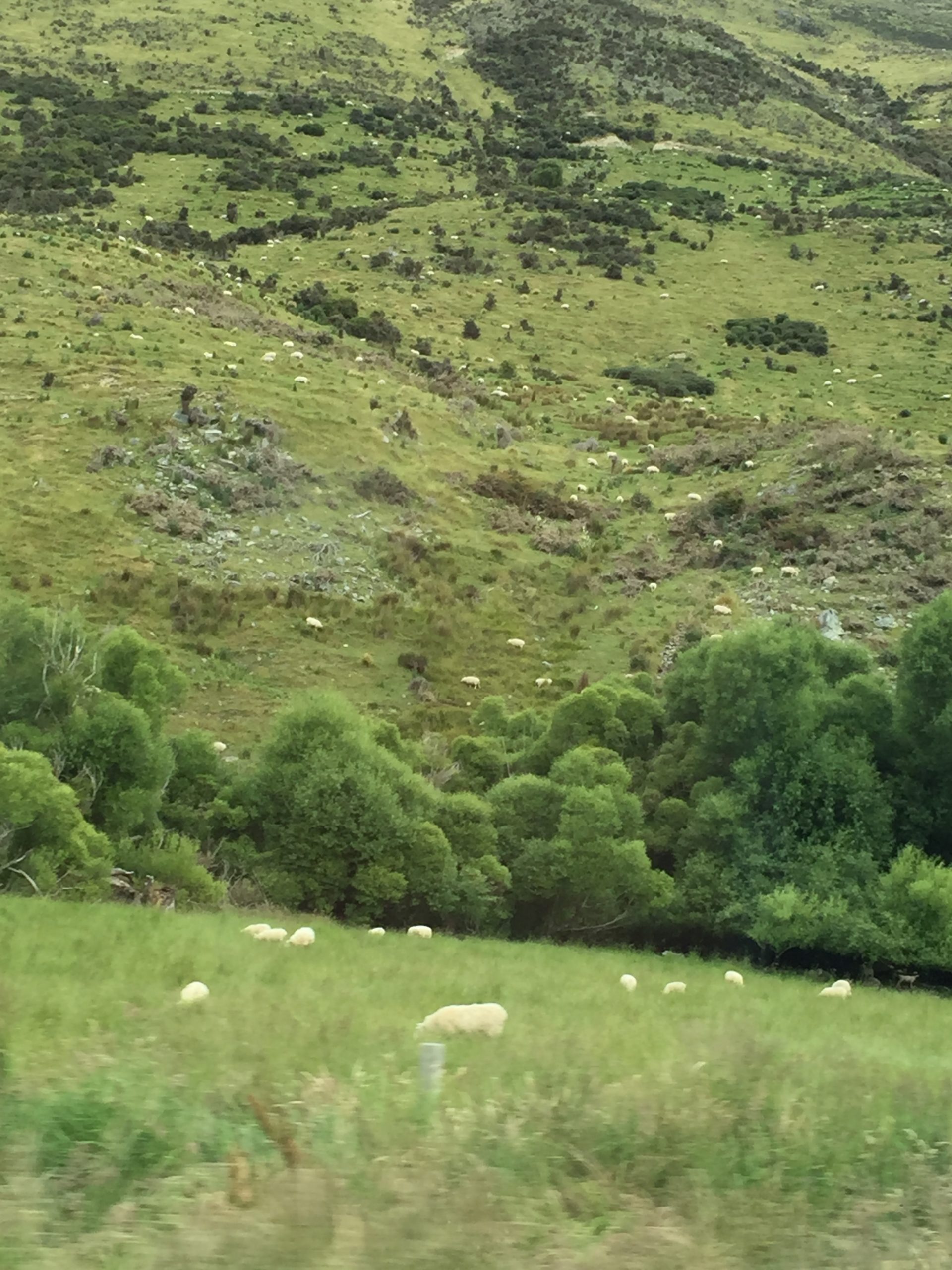 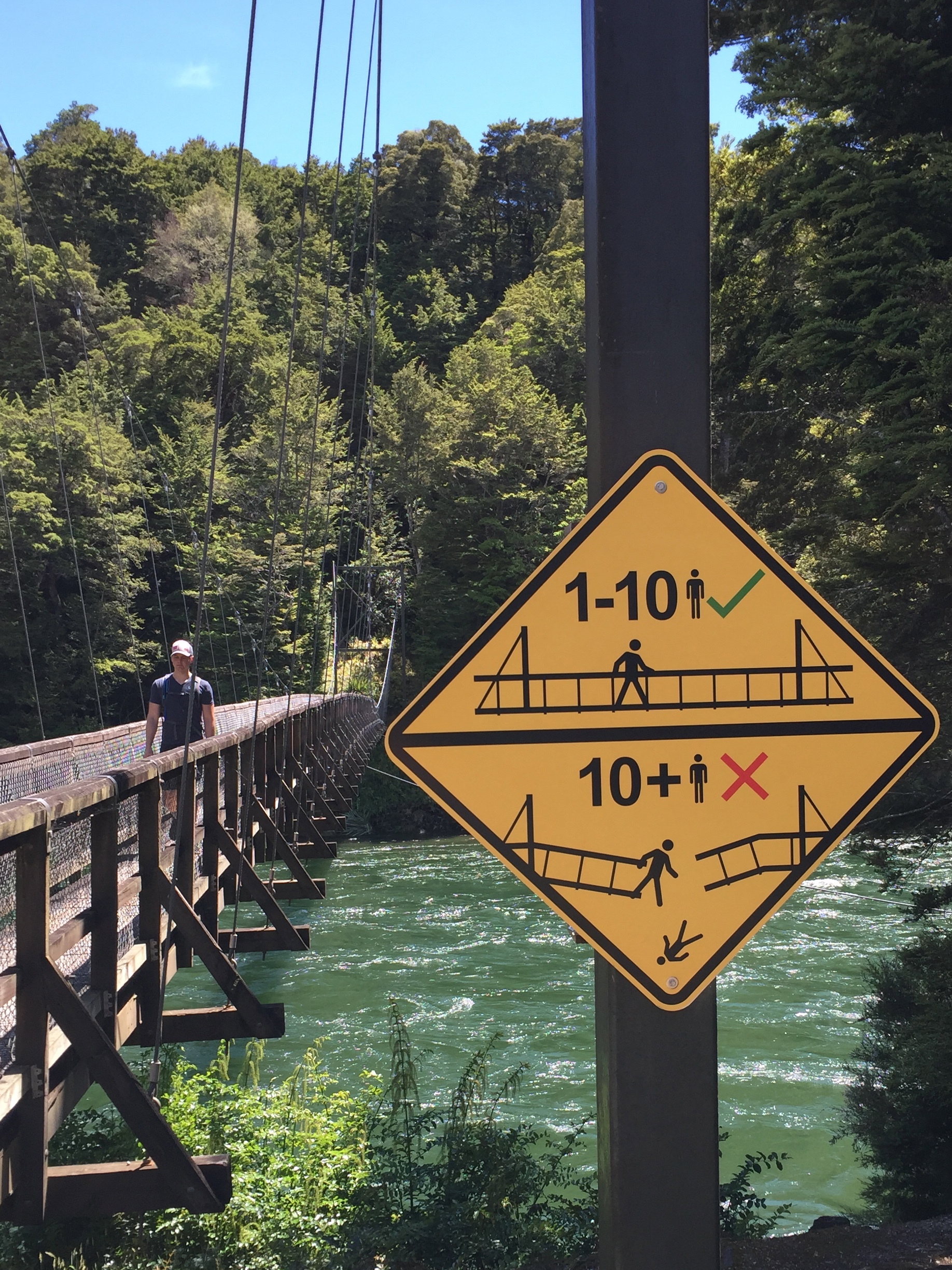 New Zealand is a tourist destination for people from around the world. Happily for me, they speak English. However, not all visitors speak the same language so officials have come up with clever signs that can be universally understood. We ran into the sign shown here at the entrance to a suspension bridge. Fortunately, there were only four of us on the bridge so we didn’t risk tumbling into the rushing water below.

As you may know, New Zealand is know for its exquisite wool and wool products. Like any self-respecting visitor (and a knitter to boot), I was thrilled to find the The Merino Story and wool shop, disguised as giant sheep in Tirau (North Island). Yes, I made purchases. 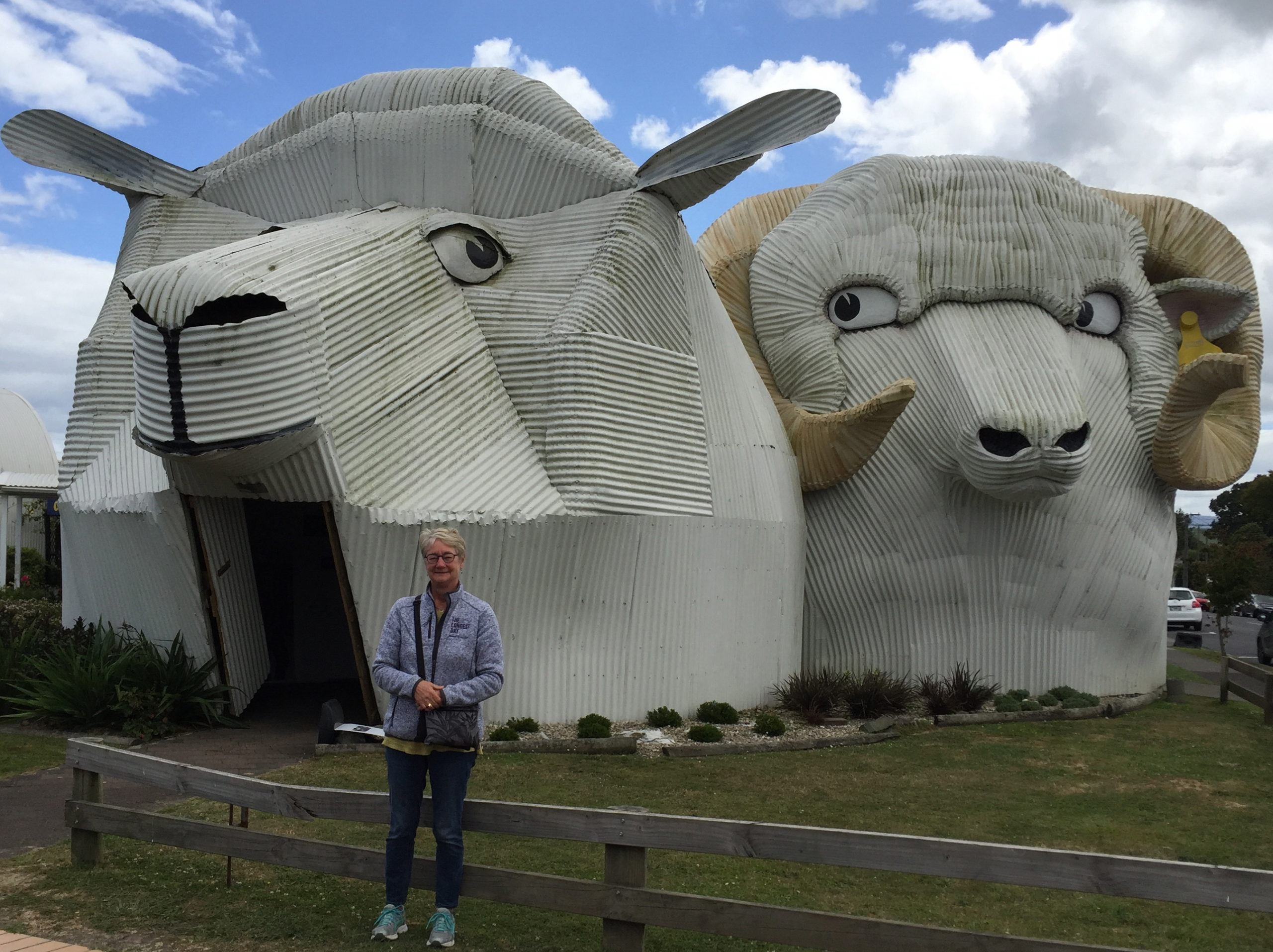 Although I took my knitting (I never travel without it) and we spent many hours in the car, boats, or buses, I didn’t knit a single stitch! However, I did return home with a lot of inspiration.