I don’t know what possessed me, but I agreed to do a video workshop on cast-ons and bind-offs for Interweave. I’ve spent the last couple of months researching techniques and knitting endless swatches in preparation for the taping last week.

Interweave has a pretty good method to organize the tapings–the materials (in my case, swatches, needles, etc.) are grouped in trays in the order they are to be presented. So that I could keep track of what was what, I did the cast-on swatches in red: 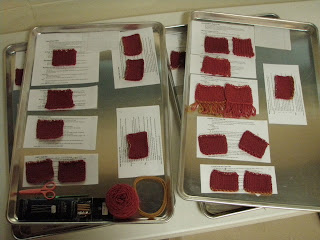 And the bind-off swatches in blue: 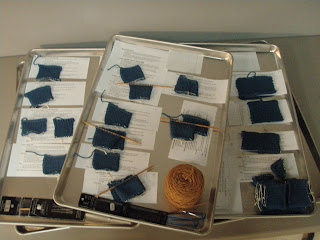 We taped more than 30 cast-ons and more than 20 bind-offs, including variations. I don’t think I’ve ever talked so much in a single day!

I believe the video will be available in August, but that probably depends on how much editing needs to be done. Hopefully, there will be something left after all my bloopers have been removed. If you do have cause to watch the video, be kind. I’ll never get used to being in front of a camera (or three!).

3 thoughts on “Another Video”