I’ve run into a little problem with my Almondine socks–the problem being that I have too little yarn.
Anne Hanson used Cascade Heritage Paints; I used Kollage Sock-a-Licious. I didn’t bother to look at the yardage of each and now I’m paying for my oversight. Heritage Paints comes in 437-yard skeins; Sock-a-Licious comes in 350-yard skeins. That’s a difference of nearly 90 yards. It wouldn’t have been a problem if I had knitted one of the two smaller sizes, but I knitted the third size for a 9″ foot circumference (which, it turns out, is too big for me).
When I finished the first sock last week, I knew I was in trouble because I had less than half a skein left.
I decided to knit the leg of the second sock on the same number of stitches I used for the first, then decrease the gussets until 60 stitches remained (instead of 70 as called for in Sock Knitting Master Class), and knit the foot according to the second size. I figured that the smaller foot would conserve yarn and I’d have a chance of ending up with enough.
When I ran out of ball yarn, I undid the Kitchener stitch in the toe of the first sock, and knitted the second as I raveled the first. My oldest son was kind enough to point out that I’d still end up with only one sock. 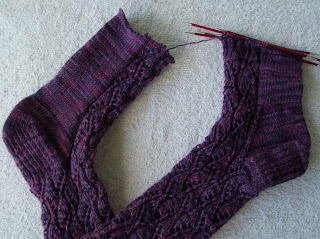 In case I still came out short on yarn, I knitted the second sock to the beginning of the toe and set it aside. I then ripped out the rest of the foot on first sock to the gussets, then added more gusset decreases, then worked the foot as far as the yarn lasted. I got to about 6 rounds short of the beginning of the toe. (I would have had enough yarn if I had chosen to reknit the legs smaller, too.)
So, now I have to decide whether to buy another skein of yarn or finish off the toes with something else. I spent a while in the basement going through my stash and I have found a good color match in Lorna’s Laces Shepherd Sock. 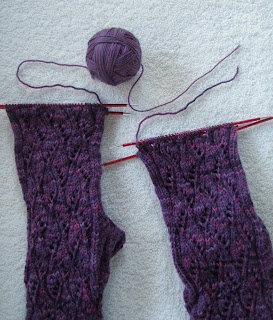 But the yarn is considerably thinner than what I was using. I haven’t decided yet whether to use the thinner yarn, use a yarn of matching weight but contrasting color, or break down and buy another skein of Sock-a-Licious.
I’ll let you know when I’ve made a decision. I think I can be fairly certain that I’ll keep this pair.